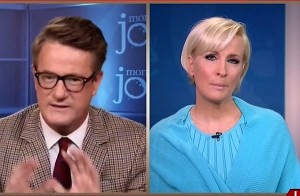 On Friday morning, when we were still several hours away from Republican presidential nominee Donald Trump‘s announcement that he no longer believes the “Birther” conspiracy that he falsely claims Hilary Clinton started, a funny thing happened on Morning Joe. Co-host Mika Brzezinski was reading out the statement that Trump flack Jason Miller put out last night, only with a strange omission. See if you can catch it:

What Brzezinski is curiously skipping is the part where Miller asserts that “Even the MSNBC show Morning Joe admits that it was Clinton’s henchmen who first raised this issue, not Donald J. Trump,” which is a lie. Well, it’s a lie that Hillary Clinton or her hench-persons had anything to do with starting the “birther” movement, anyway. Morning Joe‘s involvement in spreading that lie is a different matter.

The Trump campaign’s memo linked out to a video of Joe Scarborough and company blaming Hillary for “secret Muslim” rumors, which were actually started in 2004 by a Republican named Andy Martin. Apparently, though, Scarborough and company didn’t feel like arguing the finer points of that distinction, and so they ignored it altogether. In fact, while ignoring Trump’s citation of his own show, Scarborough even had the nerve to quote fact-checkers debunking the lie that he, himself, promoted.

This claim about Hillary starting the birthers is the next phase in this story, and Morning Joe needs to get its own story straight before they decide it’s time for any of them to have anything to say about it.

Update: MSNBC points out that, ten minutes after omitting the reference from her reading of the Trump statement, Brzezinski did make reference to the mention, although she still didn’t read it. Here’s what she said (via email from MSNBC):

MIKA BRZEZINSKI: So the statement released last night by the Trump campaign mentioned our show as having pointed out that Hillary Clinton’s 2008 campaign played a role in the start of the birther movement. (The statement actually said “Even the MSNBC show Morning Joe admits that it was Clinton’s henchmen who first raised this issue, not Donald J. Trump”) A 2011 Politico article on the origins of birtherism suggests the answer instead lies with Clinton’s supporters. “The answer lies in Democratic, not Republican politics, and in the bitter, exhausting spring of 2008. At the time, the Democratic presidential primary was slipping away from Hillary Clinton and some of her most passionate supporters grasped for something, anything that would deal a final reversal to Barack Obama.”