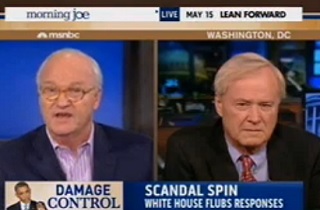 The past several days have seen an awful lot of overselling, by the mainstream political press, of twin unfolding political scandals involving the IRS’ targeting of conservative groups, and of the Justice Department’s seizure of The Associated Press‘ phone records. On Wednesday morning’s Morning Joe Obama Piñata Party, MJ regular Mike Barnicle threw another shrimp on the hype barbie when, during a litany of complaints about the President, he accused the Justice Department of “throwing an electronic eavesdropping blanket over 100 Associated Press reporters,” in clear contradiction with the facts as they are currently known.

Responding to remarks by panelist Chris Matthews, and others, Barnicle summed up the conversation, saying “Chris, play back the last eight minutes on what you’ve said, and what Ron was saying, what has been said here. It seems, off of just these last eight minutes, we have a President of the United States who has, indeed, had a couple of pretty strong chiefs of staff.”

“Rahm Emanuel and Bill Daley.” he continued, “and had also at the same time a President of the United States who’s seemingly surrounded by people who, when it comes to the IRS going after conservative groups, but don’t tell the President this, when the Justice Department is throwing an electronic eavesdropping blanket over 100 Associated Press reporters on a national security issue, but don’t tell the President about this. So is it not, are you not at the point where we have a President of the United States who may have had strong people around him at one point in time, but doesn’t want that? He doesn’t want it? It’s a reflection on him.”

The word “eavesdropping” has a very specific semantic and legal meaning, which is “to listen secretly to the private conversation of others.” The Justice Department has not been accused of tapping phones, but of seizing two months worth of records of outgoing calls, including telephone numbers and duration of the calls. That’s serious enough, and the harm it has done to The Associated Press is almost incalculable. It’s hard enough to get sources to trust that you will protect their identities. There’s no reason to oversell this story, let alone to outright falsify it. To make matters worse, no one on the Morning Joe set, not even Chris Matthews, bothered to correct Barnicle.