Morning Joe’s Mike Barnicle: Thing About Romney Is He ‘Won’t Scare You When You See Him Physically’ 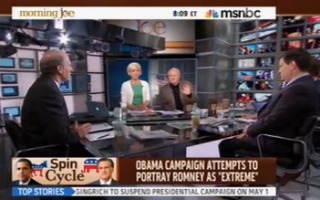 On Thursday’s Morning Joe, the panel continued to discuss the Obama campaign’s attempts to paint presumptive GOP nominee Mitt Romney as both a “flip flopper” and as, as the panel has put it, “a right-wing nut.” As host Joe Scarborough sees it, only one of those labels fittingly describes Romney. “This narrative that Mitt Romney is a radical,” he said, “it’s not going to sell because it’s not true. He’s a flip flopper.”

What Romney does on the campaign trail and what Romney would do as President, he said, are two completely different things. And Americans, he opined, recognize that.

“First of all,” said panelist Richard Haass, “he doesn’t look like a radical, he doesn’t talk like a radical. He doesn’t comport himself like radical. When people get introduced to him, they are not going to see him as a radical. That is I think what’s so critical. Plus, he that has chance to reintroduce himself to the bulk of the people. I know it’s shocking for this show, but most Americans are not hanging on to every word of the Republican primaries. So, after Labor Day, when they get on the stage, for Romney actually, it’s a tremendous opportunity to say ‘this is who I am,’ define himself against the backdrop of what is likely to be a flagging economy. I actually, again, think he has a real opportunity here.”

“It might be a better shot,” he then joked, “that’s saying ‘It’s Thursday, do you know what Mitt Romney’s positions are today?’ He can’t make up his mind on anything.”