Most Of The Five Side With Brian Williams Over Newt Gingrich, Think Silencing Audience Is A Good Idea
video

Most Of The Five Side With Brian Williams Over Newt Gingrich, Think Silencing Audience Is A Good Idea 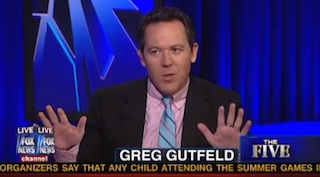 Recently, Newt Gingrich has had a massive upswing from his new debate strategy; forget the candidates, go after the moderator. Twice now, he’s taken huge swings at the closest representative of the media at the nearest sign of a question that seems untoward. And, twice, he’s been able to reap the benefits of those attacks by milking the audience’s applause like an arena rocker on his third encore. Heck, I think anyone would choose that over actually answering the damn things. Anyway, last night, Brian Williams threw a wrench in Gingrich’s gameplan by keeping the crowd quiet and, of course, Gingrich was not happy. While some conservatives are taking Gingrich’s side today, four out of the titular five on Fox News disagreed, arguing that the quiet was for the best.

Greg Gutfeld initiated the conversation, explaining in a monologue that the biggest issue of importance was who could beat President Obama and, since there won’t be raucous audiences in the debates with the president, there’s no point in having them now. Dana Perino pointed out that it’s kind of a good idea to be able to hear the candidates talking about their actual policies instead of grandstanding. And Andrea Tantaros, though less sure than the previous two, couldn’t help but scoff at Gingrich’s claim that Williams was trying to “control” the audience’s “free speech.”

The only one of the group who was taking Gingrich’s side was Eric Bolling who latched onto a sports analogy from Gutfeld and argued that it’s no fun to play a game with a silent crowd.

However, if I may expand on Gutfeld’s analogy with his earlier point, if debating was a tennis match and the debates with Obama were Wimbledon, a player shouldn’t be wasting their time practicing on a clay court.