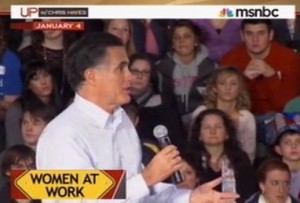 As if Mitt Romney and the Republicans hadn’t already overplayed the hand that the media dealt them by snipping and blowing up a comment from CNN’s Hilary Rosen into a fake “War On Moms,” along comes MSNBC’s Chris Hayes to give Gov. Romney his come-Up-pance. The Rosen flap relied on the out-of-context notion that being a stay-at-home mom isn’t work (Rosen didn’t say anything close to that), but Hayes and co. unearthed a January clip of Romney suggesting that very premise, in fairly unmistakable terms.

In case you’ve been in a cave since Wednesday, CNN contributor and Democratic strategist Hilary Rosen created a stir by arguing that a multi-hundred-millionaire like Ann Romney just might not have the firmest grip on the struggles of everyday American women. Here’s what she said:(emphasis mine)

What you have is Mitt Romney running around the country saying, well, you know, my wife tells me that what women really care about are economic issues, and when I listen to my wife, that’s what I’m hearing. Guess what, his wife has actually never worked a day in her life. She’s never really dealt with the kinds of economic issues that a majority of the women in this country are facing in terms of how do we feed our kids, how do we send them to school and how do we — why do we worry about their future.

That highlighted phrase was then perverted to mean that being a stay-at-home mom isn’t work, and Hilary Rosen was magically conferred status as an “Obama advisor” and pressed into service in an imaginary “War On Moms.” (Ironically, in that same segment, Rosen decried the existence of a Republican “War on Women.”) It got a lot of media ink, as Republicans saw an opportunity to close the enormous gender gap that plagues their presumptive nominee.

It was a stupid move that was bound to backfire, and today, it did. While it’s annoying to have your words taken out of context, that’s how the game is played, and many have pointed out that if Hilary Rosen meant to say that Ann Romney had never worked “outside the home,” then she should have said that. Fair enough.

But if you’re going to pervert someone else’s words into a fake rallying cry, it pays to make sure that you, yourself, have never made an even more explicit statement to the same effect. On this morning’s Up with Chris Hayes, host Chris Hayes revealed that Romney had done just that, digging up a clip from January in which Romney said this: (emphasis mine)

While I was governor, 85% of the people on a form of welfare assistance in my state, had no work requirement. And I wanted to increase the work requirement. I said, for instance, that even if you have a child two years of age, you need to go to work. And people said, well that’s heartless. And I said no, no, I’m willing to spend more giving day care to allow those parents to go back to work. It will cost the state more, providing that day care. But I want the individuals to have the dignity of work.

Now, if Romney had meant to say “work outside the home,” well, he should have said that.

While this is a fun bit of punctuation to an explosive media narrative, it also reveals something much more important; the identity of the true class warriors in this country. Listen to what Romney is saying here. Even though it costs the government more money, he’s willing to spend it to get these lazy bitches off their asses, away from their kids, and into a job like, say, Mitt Romney’s maid, for instance. As the Up panel pointed out, such low-wage jobs often result in a net loss to families with children, as the minimal income makes them ineligible for other benefits, without replacing them with equivalent cash.

It’s something of a vicious cycle, but Republicans like Mitt Romney are uninterested in policies that would actually keep people out of poverty, rather than punishing them once they’ve fallen into it. As a friend of mine pointed out to me recently, often the “choice” for a woman to stay home and raise children is a function of the fact that the wages they might earn don’t even cover the cost of the child care they’d have to obtain to go to a job.

The bottom line is that in Mitt Romney’s America, money equals choice, and if you’re a woman other than Ann Romney, all kinds of choices will become increasingly limited.