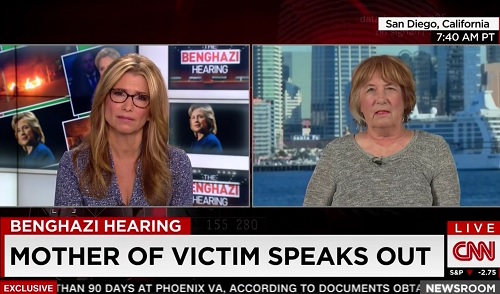 The mother of Sean Smith, one of the four Americans killed at the American consulate in Benghazi, Libya in 2012, exploded in response to a clip of former Secretary of State Hillary Clinton‘s prior testimony on the matter.

CNN Newsroom host Carol Costello was taken aback when Patricia Smith revealed in conversation that she actually didn’t know much about what happened to her son — despite the fact that the Benghazi attack occurred three years ago. Smith responded in kind, claiming that although Clinton promised to “get back to” her following her son’s funeral ceremony in Washington, D.C., no one had since contacted her on the matter.

“They told you that?” an obviously surprised Costello asked.

As alarming at Smith’s claims were, however, she really let her feelings be known when Costello played a clip from Clinton’s testimony in January 2013. At the time, Clinton said that it was their job “to figure out what happened and do everything [they could] to prevent it from happening again.”

The frustrated, bereaved mother of Sean Smith went on to repeat her claim that — despite being the mother of the fallen diplomat — she wasn’t told anything after the funeral ceremony because they didn’t consider her a member of the immediate family.

“I saw on TV the bloody fingerprints on the walls over there. I asked specifically, ‘Are those my son’s fingerprints crawling down the walls?'” she cried. “Somebody’s got to tell me!”

Clinton previously spoke with Smith during a town hall event in June 2014. Despite the direct address, however, the grieving mother later expressed her frustration with Clinton and demanded the truth.