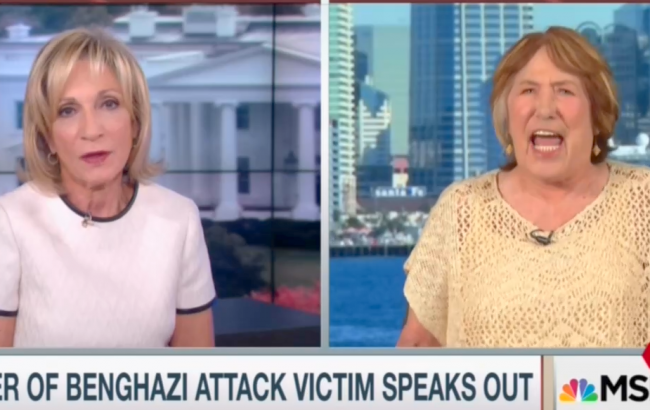 Last week we reported on a passionate CNN appearance by Patricia Smith, the mother of one of the American victims of the Benghazi attacks, Sean Smith. Today she made an appearance on MSNBC with Andrea Mitchell and identified the root of her ongoing frustration, now four days after the Benghazi Committee hearing.

Ms. Smith said there are still far too many unanswered questions that then-Secretary of State Hillary Clinton will not address; also noting she “watched every minute” of Thursday’s hearing and was left unsatisfied Clinton’s line of answering.

Smith got to the heart of her appearance early:

“Hillary didn’t answer the questions. I am still waiting… if the Ambassador cabled that he needed more people, more security, this cable according to Hillary — it did not reach her. Who did it reach and what was done so that my son wouldn’t be murdered like he was? This has never been answered.”

With growing frustration, Smith said, “[Clinton] should have known what was going on, yet she claims she didn’t, and my son died, along with the Ambassador and two other wonderful people.” Andrea Mitchell paused and pivoted, directing the questions onto Sean Smith briefly.

In the interview, the one time Mitchell was willing to show footage from the hearing, it was undeniably from the perspective of a pro-Clinton backdrop (“There was never a recommendation… to close Benghazi”). I am shocked to see Mitchell present a counterpoint argument, leading in with the words, “Her defense is…”, as she’s explaining the delicate nature of political jargon to a grieving mother who is simply demanding answers. On Clinton, Smith continued, “She won’t give me an explanation. Nobody came to help them,” referring to the night of the 2012 attacks at the US Consulate in Libya.

As Mitchell motioned to draw the interview to a close saying, “Patricia Smith, I am so sorry for your loss…”, Smith dug in and exploded at Mitchell with justifiable outrage.

The interview opposite Mitchell is particularly noteworthy; Mitchell has a long journalistic history covering Hillary Clinton from her days as First Lady in the White House. It is not difficult to track down familial reports from the mid-90s demonstrating the close bond shared by Mitchell and Clinton, and their friendly dynamic has been called out by members of the media. Additionally, I have noted that it seems as if NBC is the one media house likely to offer protection of sorts to the Democratic frontrunner, but it is clear from Ms. Smith’s interview that she is not concerned with partisan pandering for Clinton.

Smith is undoubtedly a parent in mourning not only over the loss of her beloved son (she describes him as a “pixie with a computer… a wonderful guy”), but also over the lack of accountability through the State Department. It is insulting to see how even the line of questioning towards Patricia Smith is playing a role in the larger Mitchell/Clinton/NBC fortress-enclosed love fest. Smith’s outburst is warranted, and her impassioned plea deserves coverage on all of the cable news channels and beyond.  Most have suggested Thursday’s hearing did little to dent the Clintonian armor.

Smith’s appearance on CNN last week was powerful; today, even after the Benghazi Committee, her interview is incredibly impactful, and it is impossible for even the most partisan on the left not to feel tremendous empathy. If there is one driving force to Patricia Smith’s motivation to continue telling the story of her son Sean and asking questions regarding Hillary Clinton, it can be summed up with her heartbreaking quote, “He’s not around and the government won’t talk to me.”

Watch the video of the interview above, via MSNBC.