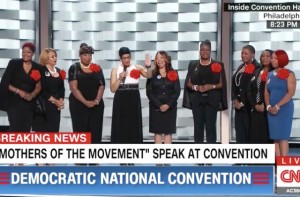 The mothers of Trayvon Martin, Michael Brown, Eric Garner, Sandra Bland and others took the stage together at the Democratic National Convention tonight. All of the women on stage were part of the Mothers of the Movement, speaking out against gun violence and police brutality.

After the DNC ran a video about their activism, all of them appeared on stage to massive applause from the crowd, which immediately chanted “Black Lives Matter!” over and over.

Geneva Reed-Veal, Sandra Bland’s mother, opened her remarks by praising God before speaking very emotionally about the “unlawful” traffic stop and arrest of her daughter. She declared, “I am here with Hillary Clinton tonight because she is a leader and a mother who will say our children’s names.”

Lucy McBath, the mother of Jordan Davis, said she still wakes up every day thinking about how to be a parent to her son after his death. She made it clear that the majority of cops “are good people doing a good job,” and she proudly stated, “Hillary Clinton isn’t afraid to say black lives matter!”

Finally, Sybrina Fulton, the mother of Trayvon Martin, emotionally told the audience, “I would not have signed up for this… but I am here today for my son.” She talked about bridging the divide between law enforcement and the communities they police.

“This isn’t about being politically correct,” she said. “This is about saving our children. That’s why we’re here, tonight, with Hillary Clinton.”