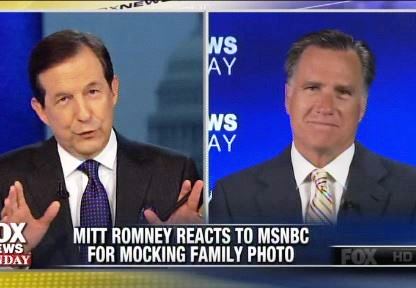 On Saturday, MSNBC host Melissa Harris-Perry offered an emotional, tearful apology for a New Year’s weekend segment that used Kieran Romney‘s appearance in a Romney family photo as a setup for jokes about diversity, and became a full-blown media conflagration. On Sunday, former Governor Mitt Romney appeared on Fox News Sunday to address the controversy, which host Chris Wallace called “a disgraceful political attack on a baby.”

Last Sunday, Melissa Harris-Perry moderated a panel that set upon a Romney family photo as the pivot point for jokes about Republican lack of diversity. Harris-Perry’s own remarks were relatively innocuous, but panelist Pia Glenn sang “One of these things is not like the others, one of these things just isn’t the same” upon the photo’s introduction, and comedian Dean Obeidallah joked “I think this picture is great. It really sums up the diversity of the Republican party, the RNC. At the convention, they find the one black person.”

All involved issued a raft of online apologies of varying scope and sincerity, with Harris-Perry citing her own Mormon background in her apology, and expressing an intention to “celebrate” the photo.Commentators and reporters from rival cable news networks made Harris-Perry the subject of multiple broadcasts this week, but Saturday morning, Harris-Perry made an abject, emotional on-air apology.

At the end of a wider-ranging interview Sunday, Chris Wallace played a clip of the controversial segment, and asked Gov. Romney “Governor, this must be hurtful, and I know you are a classy guy and you don’t want to get into it, I got to ask you, honestly, from the heart, how did you, and quite frankly, how did Mrs. Romney feel when you heard your baby grandson Kieran was the target of political ridicule?”

“Well, you know, I think people recognize, and the folks at MSNBC have apologized, recognize people like me are fair targets. If you get in the political game, you can expect incoming. But children, you know, that’s beyond the line, and I think they understand that, and feel that as well. I think it’s a heartfelt apology. I think for that reason, we hold no ill will whatsoever.”

Wallace then played a bit of Harris-Perry’s apology, but then said “On the other hand, I have to point out during the segment, she had a good laugh and said, maybe Kieran would marry Kim Kardashian’s daughter and you and Kanye West would be in-laws. Your reactions to her comments then, and her apology?”

“I think her apology was clearly heartfelt. We accept that,” Governor Romney said, and with apparent amusement, added “with regards to the rest of the comments, I hadn’t heard those and don’t have any comment on those.”