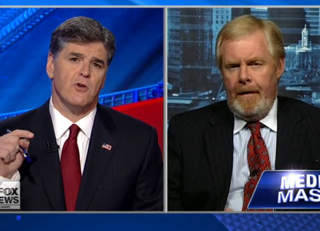 The outrage over the way some in the media have been covering the tragedy of Trayvon Martin has crossed partisan lines, as last night Brent Bozell of the conservative Media Research Center targeted the “liberal media,” particularly NBC and MSNBC, for their role in advancing the story. Bozell spoke to Sean Hannity during his regular segment on the eponymous program and condemned the “falsehoods” of NBC and called the shooting “another Tawana Brawley moment.”

RELATED: Hannity Attacks ‘Irresponsible’ Media On Trayvon Martin: ‘Why Even Have A Trial?’

“I think the public needs to be stunned here,” Bozell told Hannity, arguing that a number of sources, from NBC to the New Black Panther Party, were distorting the story. “Somebody has got to stand up and say ‘these people are out of control,'” he demanded. Hannity then plays a segment of NBC News where they play an edited version of George Zimmerman‘s 911 call that omits the operator asking for Martin’s race. “How could NBC in good conscience do that?” Hannity asked.

Bozell called this “an all-out falsehood… what they did was in the first clip, when you hear him say ‘he looks black,’ anybody believes there are racial overtones to what this man did.” He refused to put it on the lower level of “distortion,” and blamed “the radical left” who “has already acted as judge, jury, and executioner in this case.” “This is another Tawana Brawley moment we’re looking at here, folks,” he argued, referring to the case of a young black woman who claimed she had been raped by several white men, including a police officer, who were all found innocent. Bozell finished by calling NBC News “despicable” and accusing them of telling “a deliberate lie” on TV.