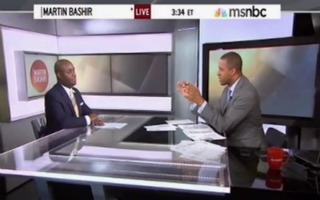 On Friday, Craig Melvin, fill-in host for MSNBC’s Martin Bashir, hosted a panel discussion on the Republican party’s use of coded racism and “dog whistles” as a political wedge. His panel guests, Politico’s White House correspondent Joe Williams and TheGrio.com contributor Edward Wyckoff Williams, agreed that President Barack Obama has been subject to racially insensitive attacks from the right in an effort to mobilize voters who regard Obama with suspicion because of his race.

“Do you believe that race-baiting is still something that is very effective in American politics,” Melvin asked Williams.

“Yes, I do,” said Wyckoff Williams. He says that what the country is experiencing now is a backlash against the “hope and change” of 2008, which Williams said he calls “white redemption 2.0.”

Wyckoff Williams went on to describe the opposition to President Obama, which he described as rooted in an American tradition of racial animus, as “insidious.” Williams said that the Republican party has attempted to turn “poor whites” against this president to “delegitimize him.”

Wyckoff Williams says that the Republican party has embraced and propagated the notion that President Obama was not born in America and is a secret Muslim. “All of that is race-laced I would say,” said Wyckoff Williams.

“It’s a claxon. It’s an air raid siren. It’s a call to arms,” said Williams. He said that voters “respond to these code words,” but they are turned off when these tactics overreach. In that way, Williams said that racially coded attacks on Obama could backfire.

“President Obama is nothing if not a moderate,” said Williams. He says that he is confused that attacks like “birtherism” on President Obama refuse to disappear. “It seems very strange that these attacks would be coming whole cloth with nothing to back them up,” Williams concluded.