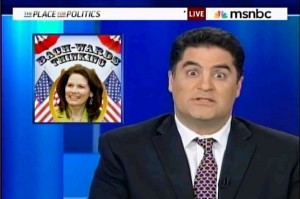 It’s fair to say that TV pundits aren’t a particularly “nice” bunch – they’re tasked with taking a look at world events and the politicians who shape them through a (highly) critical lens. Sometimes – or, you know, most of the time – that criticism can take a turn for the personal, not only because individual people in politics often do or say incredibly stupid and/or hilarious things, but also because going after the person behind the policies more often than not makes for better ratings. But at what point does going after individuals become petty and mean and, well. Spectacularly lazy?

That’s the question I asked myself when watching MSNBC’s Cenk Uygur take on Republican Representative Michele Bachmann. Nine times out of ten, it’s easy to predict what a pundit will say about any given politician, and Bachmann is a frequent target for liberal TV hosts (Ahem. Cough. Wheeze.), so it was expected that Uygur would go for the jugular. But when he began making fun of her eyes, the only think I could think was, “Really?”

It’s just not all that funny to watch a grown man with a fairly serious job mock a woman for her appearance (or a man for his). But, more significantly, it makes Uygur look petty, unintelligent and lazy. My respect for and interest in any actually valid points he has to make about Bachmann wane in light of his impression, and it makes it seem like what he has to say about Bachmann is personal and emotional rather than thoughtful or intellectual. And, you know, I just don’t want to see someone go off on someone they personally hate, because it undermines their point. If I wanted to listen to gossip or the personal opinions of people who aren’t particularly qualified to weigh in on political matters, I’d watch The View. (Nothing personal, of course.) Plus, yeah, we get it: Michele Bachmann has wide eyes. John Boehner is very tan. Sarah Palin has a distinctive accent. I’m sure everyone has something about them others will find amusing or awkward. What does any of this have to do with that person’s ability – or inability – to be a thoughtful, productive lawmaker?

And it’s not just Uygur. His MSNBC colleague Chris Matthews routinely goes after Bachmann for her looks and mannerisms (you can check out a couple of examples in my coughing fit a few paragraphs back) to the point that he seems not only fascinated by Bachmann, but downright obsessed with the Congresswoman – which hurts his credibility each and every time he speaks about her. And, for what it’s worth, I just can’t see prominent Fox News personalities doing this. Bill O’Reilly, arguably the Poster Pundit for conservative opinion news, often takes jabs at the left, but I’m hard pressed to find an instance of him going after the looks or physical quirks of anyone with whom he disagrees. His takedowns can be downright acerbic and biting, but they never seem superficial.

My advice to Uygur (…advice for which, curiously, he’s yet to ask me) and is ilk would, then, be this: Don’t hesitate to be funny. Don’t back down from being brutal and nasty if the topic calls for it. Get angry, be snarky. But don’t make it personal. And, for the sake of God and/or Pete, stop pulling Bachmann’s pigtails in the sandbox. Not only is it petty, it’s gotten boring to watch.

Take a look at Uygur’s full segment for yourselves, courtesy MSNBC: