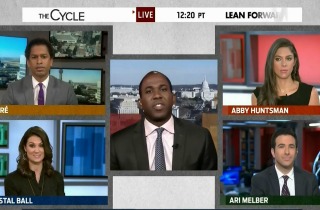 In an interview with The New Yorker, President Barack Obama said that his job approval ratings are sagging in recent months partially because there are some Americans who “don’t like the idea of a black president.” Appearing on The Cycle on Monday, MSNBC on-air analyst Perry Bacon said that the comments indicate to him that Obama knows he is not going to “unify the country” as he intended before he became president.

“There’s no doubt that there’s some folks who just really dislike me because they don’t like the idea of a black President,” Obama told The New Yorker.

RELATED: Obama: ‘Some Folks Who Just Really Dislike Me’ ‘Don’t Like the Idea of a Black President’

“You can do very little in a year like this,” Bacon said. He added that Obama has consumed the political science on second term presidents and knows that he is going to be unable to get much accomplished in his second term that requires congressional participation.

Host Krystal Ball said that she thinks Obama has acknowledged that he has been unable to “transcend” both race and the culture of Washington D.C.

“He very frankly acknowledged, for the first time ever, I think, that some opposition to him is driven by race,” Bacon said. “He basically said that, ‘Some people don’t like me because I’m black, which he usually tries to avoid.”

“I think that does tell you he doesn’t view — he is not going to unify the country the way he talked about in 2004,” Bacon continued. “I think he knows that now.”