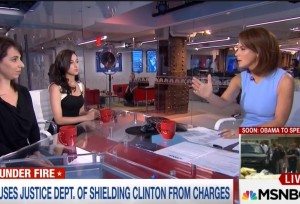 The chatter about Democratic presidential nominee and former Secretary of State Hillary Clinton and her emails is nothing if not constant, and so it is that a story concerning emails and the Clinton Foundation is dominating political news to start the week. A funny thing happened on MSNBC’s dayside MSNBC Live program Tuesday afternoon, as anchor Stephanie Ruhle quizzed a couple of print journalists about the newest “scandal,” and drew out a startling admission.

The latest batch of emails to undergo scrutiny involves donors to the Clinton Foundation, like the crown prince of Bahrain and Bono, seeking favors using Clinton Foundation and Hillary Clinton aides as intermediaries. The flaw in this story must be pretty glaring, however, since it didn’t take Ruhle more than a few seconds to get The Washington Post’s Catherine Rampell and Politico’s to admit that there’s nothing to it beyond how it “looks”:

Would we not need a smoking gun? Everything is a relationship, and if you think about some of the e-mails that one would point out, the crown prince of Bahrain. Bahrain is an ally to the United States. The Crown Prince could get a meeting with anyone. A message from Bono asking if he could use a space station, I’m pretty sure Bono can call anyone, so were these clear favors that only the secretary of state could give, and that she did?

Only for Hillary Clinton is it a “problem” that she “clearly didn’t break laws.”

“There is no quid quo pro, but it looks bad” might just as well be the mantra of every reporter who’s reporting on this story without getting around to explaining why anyone should consider it when they decide whether or not to hand Donald Trump the keys to the country, or even to decide that the work of the Clinton Foundation should be hounded out of existence. The “optics” excuse gets more tiring the higher the stakes get, because the very purpose of journalism is to provide the depth and clarity that “optics” alone tend to distort.