MSNBC Anchor Grills GOP Rep. On Why Congress Is Going On Recess Before Dealing With Sequester 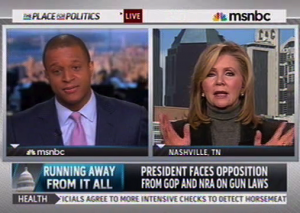 Republican congresswoman Marsha Blackburn appeared on MSNBC earlier today to defend members of Congress going on a week-long recess before dealing with the sequester scheduled to go into effect on March 1. Blackburn pointed out that Congress has known about the need to deal with spending cuts since August 2011 and it’s not sufficient to just start complaining now, less than a month away from the deadline. She argued that many Americans actually want spending cuts, but not to the military.

Anchor Craig Melvin brought up Nancy Pelosi‘s criticism of Congress for going on vacation before a deal could be reached on the automatic spending cuts. Blackburn said that everyone in Congress knew for over a year that they would have to deal with spending cuts and the Senate has not acted on any legislation passed in the House.

Melvin asked her about the optics of members of Congress leaving just as there is a looming crisis ahead. Blackburn said her own constituents want the spending cuts to take place and make sure that all non-defense discretionary spending is cut across the board. She touted a bill that will be brought up by Republicans to give the military some “flexibility.”

Blackburn argued that people all across the country believe that Washington has a spending problem. Melvin cited a study by the Congressional Budget Office finding that the spending cuts would have a “devastating effect” on the economy, and up to 750,000 jobs may be cut. Blackburn stuck to her guns and insisted there is “so much waste” in the federal government that can be cut down, while making it absolutely clear that people overwhelmingly do not support defense cuts.