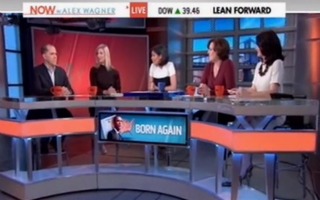 MSNBC anchor Alex Wagner hosted a panel discussion on the resurrection of the “birther debate” by two elected officials in Arizona. She said that the newly reopened investigations into President Barack Obama’s birth certificate are being conducted by “crazy people.”

RELATED: Hannity And Palin Chastise GOP For Not Fighting Back Against Democrats’ Campaign Tactics

Wagner opened the segment by playing a clip from an interview that former Alaska Gov. Sarah Palin gave to Fox News Channel on Monday night in which she said she differed from Sen. John McCain’s (R-AZ) advisers in 2008 and thought it was appropriate to attack then Senator Obama on his association with Rev. Jeremiah Wright and Bill Ayers.

Wagner asked Salon.com editor Joan Walsh what she made of Arizona’s Republican Secretary of State Ken Bennett’s political future now that he has given credence to those who say that further proof that President Obama was born in the U.S. is needed in order to certify him for the presidential ballot in 2012.

“Why are these guys still talking about this,” asked Wagner.

“Because they think it works to rile up their base,” replied Walsh. “We’re talking to a bunch of crazy people. They would not reopen—whether there was a real moon landing or not, but they are going to relitigate this over and over and over. And we’re paying attention.”

“If I don’t write about him, maybe he’ll go away,” Walsh concluded. “It’s not working yet, but that’s my contribution.”

Wagner said that Arpaio has increased the scale of the investigation into Obama’s birth certificate by sending investigators to Hawaii. “This is the kind of gumshoe reporting that only, I don’t know, crazy people practice,” said Wagner.

Eric Bates, Rolling Stone Magazine’s executive editor, said that Arpaio was facing a criminal investigation by the Justice Department for presiding over institutional discrimination against Hispanics and that his “cold case” investigation was merely his way of executing some push back against the federal government.