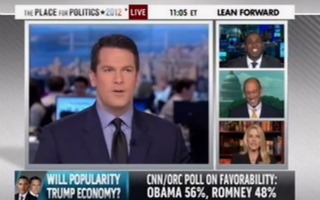 MSNBC anchor Thomas Roberts engaged in a heated exchange with Alice Stewart, former campaign press secretary for Rick Santorum’s presidential bid, during a panel segment on Monday. Roberts went after Stewart after she claimed that a figure which showed Massachusetts was 47th in the nation in job creation during Mitt Romney‘s time as governor was a “misleading figure” put out by the Obama administration. Roberts grilled Stewart on this assertion and asked her “was it 47th or not” four times before Stewart clarified her response.

The panel segment on MSNBC on Monday examined Romney’s attack on President Barack Obama in the wake of a jobs report from Friday that showed the unemployment number increasing for the first time since June 2011.

Roberts asked his panel if Republican efforts to highlight this bad economic news reflected poorly on Republicans who could be viewed as “rooting for failure.” Roberts cited polls that showed Romney’s personal favorability on the rise but still persistently below that of President Obama if the Romney team “should be worried about that.”

Stewart characterized the jobs report as “dismal” and clarified that “Republicans certainly aren’t cheering for that because we have of people out of work.” Stewart claimed that unemployment in Massachusetts hovered around 4.2 percent when he served as the state’s governor. She further said that Massachusetts enjoyed “tens of thousands of jobs created” in that period.

Roberts shot back that she is describing a period where Massachusetts ranked 47th in the nation in terms of job creation and asked her how she could say that was a good record.

“That’s a misleading number you’re putting out there that was put out by the Obama campaign,” Stewart replied. Roberts became heated at this point and shot back “was it 47th or not” repeatedly.

“He took it from 50th to 47th,” Stewart finally conceded. She said that Romney left office by closing a shortfall in the budget and left a $2 billion rainy day fund behind him.

Watch the segment below via MNBC: