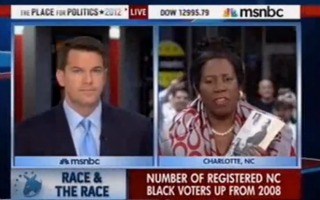 MSNBC anchor Thomas Roberts spoke with Rep. Sheila Jackson Lee (D-TX) on Tuesday morning about the expected enthusiasm of Democratic voters in 2012 as compared with 2008. They also touched on the issue of voter identification laws, which some have charged are aimed at disenfranchising minority voters. During the conversation, Roberts opted to casually frame a question on voter identification as the Republican Party advancing the institution of a “poll tax.” If the Republican Party is advocating for a poll tax to discourage minority voters, that would be a crime – a high charge for a journalist to make. Fortunately for the GOP, they are guilty of no such thing.

“One issue impacting minority voters is voter ID – early voting restrictions,” Roberts began his question. “In your home state, a federal appeals court tossed out a voter ID law last week saying that it was an ‘unforgiving burden on the poor.’ Governor Rick Perry responded saying, ‘chalk up another victory for fraud.’ With 19 states now involved in this fight, why does the Republican Party – the party of smaller government and less taxes – want to institute more red tape and basically a poll tax on Americans to vote?”

Rep. Jackson Lee called the question “enormously astute.” If that’s not all you need to know about the folly contained within the above inquiry, then here goes:

Poll taxes, rendered unconstitutional by the 24th Amendment, are illegal. To accuse Republican legislators of imposing such a tax on voters as a means of dissuading them from casting a vote is to abandon the role of neutral journalist and join the ranks of partisan campaign operatives.

States like Georgia and Tennessee, whose photo ID laws have been upheld and were left intact even in the opinion of the court the court which halted the implementation of a similar law in Texas last week, have offered their residents free photo identification. In Kansas, as of early August, only 32 of the state’s 1.7 million voters applied for free photo identification. Less than .005 percent of Georgia’s 6 million registered voters did the same.

In Georgia and Indiana (a state conspicuously absent from Roberts’ map), where photo ID laws have been in place since 2006, minority turnout has increased – not decreased, as those who decry ID laws as a means of disenfranchising minority voters ceaselessly claim. In 2008, President Barack Obama became the first Democrat to carry Indiana since 1964 – a feat that should have been impossible by in a state with draconian, Jim Crow-era policies like requiring identification at the polls.

That Indiana ID law, one of the nation’s strictest according to the National Conference of State Legislatures, was upheld by the Supreme Court in 2009. Texas’ state voter ID law, struck down last week by a three-judge panel at the request of the Justice Department’s Civil Rights Division, will be appealed to the nation’s highest court next year.

Democrats have a winning argument to make in the nature of the battle over photo identification. They cite accurate statistics when they claim that in-person voter fraud is rare enough to argue that it is not a problem at all. But Democrats and their supporters muddy the argument when it is framed in terms of racial disenfranchisement – as virtually every wedge issue has been during the 2012 presidential campaign. The data does not lend credence to that conclusion.