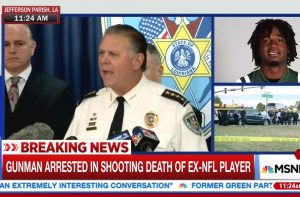 MSNBC was forced to cut away from a press conference and apologize Tuesday after a Lousiana sheriff angrily denounced the racist and profanity-laced attacks he and other officials had faced, not bothering to self-censor as he did so.

Jefferson Parish sheriff Newell Normand thanked the lawmakers who told their communities not to jump to conclusions about the shooting death of former NFL star Joe McKnight and let the police do their job. “You did not do what was in your best interest, you did what was in the best interest of your community, and you’re suffering for it,” he said.

An impassioned Normand read off some of the hateful comments those politicians received on social media. “It’s not fair for him to be called, ‘You punk-ass Uncle Tom coon, we saw you sell out to them, you ratass faggot punk,’” he read. “That’s the tone of what we call our elected leaders for standing up and simply saying let justice prevail and let the process take its course.”

Normand began to read off more hateful comments, but once he got to “you ass-kissing faggot,” MSNBC anchor Tamron Hall intervened, cutting their live coverage short.

“First of all, let me apologize for some of the language we were not expecting,” Hall said. She again apologized for the “racial slurs and homophobic remarks that we did not prepare and did not honestly expect from the sheriff of a police department.”

Had MSNBC stayed on live coverage of the press conference only seconds longer, they would have also broadcasted Normand reading off hateful tweets calling a lawmaker a “nigga” and a “self-serving son of a bitch.”.