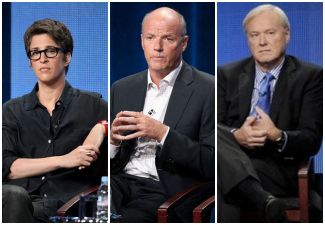 And when the losses mounted and morale continued to tumble, the guy in charge fired the punter and field goal kicker.

The NFL season may be over, but the analogies never go out of style — particularly as they apply to the Washington Redskins of cable news in the form of MSNBC. In this case, the punter is Ronan Farrow and the kicker is Joy Reid, two small cogs on a team that needs a complete revamping starting with its general manager and head coach, Phil Griffin.

If it ain’t broke, don’t fix it is the old saying. Well, MSNBC is broke. Going left was once a good idea, particularly in 2008 and 2012, when the election and re-election of Barack Obama did wonders for a network trying to be the anti-Fox. But as we’ve seen the last two years, nobody is buying what the “Lean Forward” network is selling anymore, regardless of who’s doing the selling. Even flagship programs like Hardball and the Rachel Maddow Show aren’t remotely competitive anymore with Fox or even CNN.

On many days and nights lately, MSNBC is even losing to HLN showing repeats of Forensic Files at a fraction of the cost (Maddow makes $7 million/year, while Matthews pulls in a reported $5M/year). No word on what the guy who throws in the tape and shuts the lights off makes over at HLN.

“Reassigning” Farrow — which I first reported here via a well-placed source but admittedly missed on the timing of — is the right move given the 11K he recently registered in the 25-54 key demo. Reid wasn’t performing much better and started her show on the same day, making her program’s dismissal an easy call as well. But what about the bigger players on the team like quarterback Chris Hayes, who sits in the most important timeslot on the network and has never resonated with an audience. He gets beaten by a 4/5-to-1 margin by Bill O’Reilly on most nights while invariably gets doubled up by Anderson Cooper on CNN. Now there are even questions about the aforementioned and previously sacrosanct Maddow, who has lost 50 percent of her audience from this time last year.

One other question that seems to be on many minds is how Al Sharpton has survived to this point. The answer is quite simple: Sharpton can’t be fired regardless of performance both from a content and ratings perspective, both of which are about as horrific as it gets. Why? As noted in this space before, because Comcast and NBC — and this is just an educated guess — must be petrified to fire him (by, yes, the race card being turned against them). Remember, Sharpton gave his crucial blessing to the Comcast/NBC Universal merger a few years back. Not long after, he was magically given his own show at 6:00 p.m. on MSNBC despite zero experience as a host as well. Reciprocity at its finest.

Know this: Fixing 1:00 and 2:00 p.m. won’t solve anything in the short or long term. An entirely different strategy is needed now, a new philosophy. That doesn’t mean MSNBC suddenly becomes Fox 2.0, but the network clearly went too far to the left and created an echo chamber hour after hour outside of its morning show, which at least offers debate but with a cast that mostly looks burnt, almost disinterested.

So what to do if you’re Comcast or NBC News President Deborah Turness? Start by thanking the Mr. Griffin for seven good years. That’s a fine run for anyone running a network and the company did make money under his guidance. But Griffin’s moves over the past year have been reckless and unimaginative.

Reckless: Hiring Ronan Farrow, a twenty-something with no hosting experience and giving him a full hour of national television time. What could go wrong? But honestly it’s not even Farrow’s fault. Note: One test pilot would have quickly revealed Farrow doesn’t have the presence or ability to be working on that level, nor even the raw talent that could be groomed with enough at-bats. Putting him on at 1:00 p.m. to draw a young audience — many of whom are in school or working — wasn’t the brightest idea either. But here’s where the reckless part really comes in: Griffin decided Farrow was his guy (at $500K/year) after meeting him for 20 minutes. Was it his name? The Sinatra thing? The prolific tweeting — which has zero to do with being compelling on television? Who knows? But the guy making the final decision on talent has to be better than that.

Unimaginative: One of CNN’s biggest successes has been Anthony Bourdain‘s Parts Unknown (Random side note: I saw Bourdain at Time Warner Center in New York recently and he’s much taller than one would expect, almost like an NBA small forward). As many would agree, the celebrity chef is a unique talent and possesses three qualities very few in cable own: Candor, confidence and humor without the aid of a script. So what does MSNBC decide to do? Hire Tom Colicchio, a celebrity chef, to be its “progressive” food correspondent. If it works for CNN, Griffin figures, why not us? Except Colicchio is no Bourdain, and the latter is much, much more about exploring eclectic cultures than delving into complicated food policy.

After making a change at the top of MSNBC, the change in overall approach can happen from there. Perhaps a switch to more hard news using NBC resources is the smart play. More taped programming is also wise, as even Fox Business Network has entered this area more if Jamie Colby’s hit Strange Inheritance is any indication.

You know what they say about rearranging the deck chairs on the Titanic. Moving Hayes here and Schultz there while firing X, Y and Z only delays the inevitable…only keeps them wearing those Redskin uniforms. Start with Griffin and bring in fresh eyes with a new offense.

Firing the punter and kicker should only be the beginning…