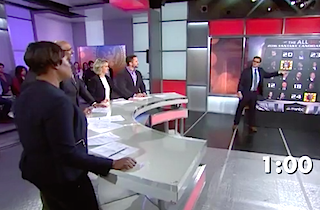 Last week, we reported that CNN is planning to get into the game show business with a political trivia-based special hosted by Anderson Cooper set to air on President’s Day. But now, it appears that MSNBC’s Chris Hayes has beat them to the punch.

With 649 days to go before the 2016 election, Hayes will host The All In 2016 Fantasy Candidate Draft tonight at 8 p.m. on MSNBC, in which contestants like Joy Reid and Michael Steele will be able to choose their own candidates in an “epic” cable news showdown.

An All In insider tells Mediaite that the idea started out as a recurring segment called “The All In Handy Dandy Guide to the 2016 Candidates,” but once the show realized just how many candidates had already entered the race they decided a “Fantasy League” would be a more creative approach. And, they revealed that tonight’s show will likely just be the first of several specials to come, with the same panel of players building up points between now and 2016.

Perhaps MSNBC is looking at Jeff Zucker’s CNN surge ahead of them in the ratings with bold programming choices and thinking it might be time for them to do the same. By the looks of the promo below, this could be their boldest move yet.

This airs tomorrow night and it's honestly the most fun thing I've done in a while http://t.co/vcOlRUDMmn