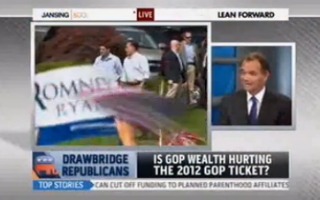 On her show Wednesday, MSNBC’s Chris Jansing invited on MSNBC contributor Matt Miller to discuss his Washington Post article about the role Mitt Romney and Paul Ryan‘s respective wealth plays in the election, as well as a group Miller has dubbed “Drawbridge Republicans.”

Miller defines a Drawbridge Republican as a wealthy Republican who is “pulling up the drawbridge behind them and shutting off opportunity for the middle class, the working classes and others.” He later pointed to England as having an example of a “conservative ruling class with a conscience.”

“The last survey I saw,” Jansing shared, “was something like 47 percent of members of Congress have a net worth that makes them millionaires. So it really isn’t about being well to-do. Although I wonder, Matt, how you think that the very different kind of person that Barack Obama has been 00 although he has now made a lot of money with his books and so on and so forth, and Joe Biden taking the train back and forth — if in time like this, it does make them someone more relatable in terms of wealth, apart from their policies.”

“I do think it makes them more relatable,” said Miller. “What I’m saying is not anti-wealth at all. It’s the idea of wealthy candidates on a national ticket who lack what I think is the moral imagination to see that –by proposing just continued breaks for the very, very top at the expense of all those who, in a global economy with rapid technological change, the threat now because of the rise of India and China that jobs can be offshore — we’ve got such a hard-pressed middle class, such a hard-pressed working class, that their idea of the cheap economic priority and their cure for everything is tax cuts at the top, it doesn’t make sense and is even out of character when you think about Mitt Romney. In Massachusetts, he is the only governor who passed a universal health care plan back when he was governor. He sort of walked away from all of that. So I think there is a deep, psychological confusion that’s unattractive, in my view ,and I think voters will find it unappealing as they focus on it.”