MSNBC Contributor: Beyond Defense, All That’s Left To Cut Are Seniors’ Heating And Milk For Children
video

MSNBC Contributor: Beyond Defense, All That’s Left To Cut Are Seniors’ Heating And Milk For Children 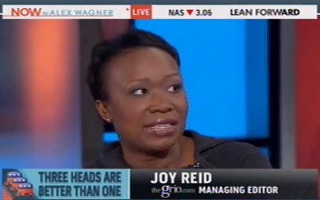 MSNBC contributor Joy-Ann Reid said on Monday’s Now that the sequester cuts aimed at the Defense Department are the only effective way to cut wasteful government spending. She said that the Pentagon is “where the money is.” Beyond defense, Reid said, the only aspects of the budget that can be cut are “old peoples’ lights and heating,” food stamps, or milk for children.

Both host Alex Wagner and former Republican National Committee Chairman Michael Steele remarked at the novelty of Congressional Republicans’ openly saying that sequester cuts to the defense department are welcome. They were surprised that the GOP’s instinct to protect defense spending has been trumped by the need to cut the federal budget.

Reid said that this was simply the effect of “reality setting in.”

“The big, giant pot of money is in defense and people have been loath to touch it for the reasons you said: the Republicans have stood in the way of ever touching the defense department,” Reid continued. “But there really aren’t other big, huge pots of money.”

In 2012, the federal government spent $3.7 trillion. Of that, approximately $716 billion — less than one fifth — of outlays were directed towards national defense.