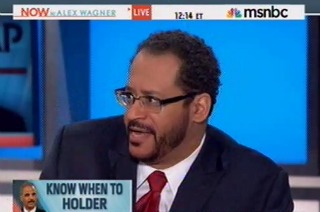 Georgetown University professor and MSNBC contributor Michael Eric Dyson revealed on MSNBC’s Now on Wednesday that he has been the target of political intimidation by the Internal Revenue Service during the administration of President George W. Bush. Dyson claimed that, after criticizing Bush on television for his government’s response to Hurricane Katrina, he was audited for five consecutive years by the IRS.

In a discussion about the unfolding scandal in which IRS agents are implicated in forcing conservative groups to undergo more scrutiny in requests for tax-exempt status than liberal groups, the MSNBC panel agreed that added scrutiny across the board would be welcome.

The conversation shifted to the scandal surrounding the Justice Department’s unilateral seizure of telephone records from the Associated Press.

“We just had a fierce debate before the election about who could vote and could not vote,” Dyson declared. He said that Attorney General Eric Holder defended the voting rights of minorities who were threatened by voter identification laws. “I’m here to hold on for Holder,” Dyson added. “It’s hard at the top for two brothers.”

“It’s also worth noting that the IRS has been used as a political tool throughout history,” asserted MSNBC host Alex Wagner. She noted that the IRS has targeted NAACP, Green Peace, and Planned Parenthood.

“Brian Williams interviewed me on television after Hurricane Katrina,” Dyson said. He noted that he was critical of Bush and Williams played that clip for the president the following day. “For the next five years I was audited by the IRS.”

Watch the clip blow via MSNBC: