MSNBC Contributor: CNN Should Say They Don’t Know What Happened Then ‘Shut Up’ 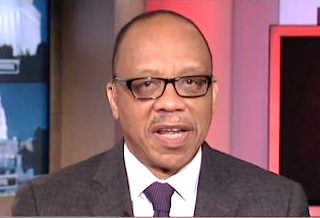 Washington Post columnist and frequent MSNBC talking head Eugene Robinson has joined the chorus of critics arguing that CNN has gone too far with its wall-to-wall “speculation” about the missing Malaysia Airlines Flight 370 plane. In a new column, Robinson singles out CNN for chasing long-shot “theories” about what happened to the airliner rather than admitting they — like everyone else — don’t know what happened.

“Let me go out on a limb: The Malaysian airliner did not get sucked into a black hole, vanish over the Indian Ocean equivalent of the Bermuda Triangle or crash-land on the spooky island from ‘Lost,'” Robinson begins, citing one of Don Lemon more “preposterous” segments this week.

He acknowledges the ratings bump CNN has received from its coverage while also adding this disclosure: “I do commentary for MSNBC, a competing network that also is obsessed with the lost plane.” Of course, as Fox’s Bill O’Reilly pointed out on his show this week, MSNBC has likely done the least amount of coverage on the plane of the big three cable news networks.

Robinson ends his column with some advice for CNN and any other media organization trying to cover this story from all angles:

I think there must be something in all of us that is drawn to mysteries and disappearances. When stories are incomplete, we have an instinct to write endings. “What happened?” is the basic question that all journalism tries to answer.

But when we don’t know the answer, we should just say so — and then shut up. Endless content-free coverage deserves to be eaten by a black hole.

As long as viewers keep tuning in to hear what crazy theory CNN can promote next, it’s unlikely that they will heed his call.