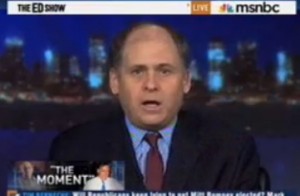 On Thursday night’s The Ed Show, MSNBC political analyst and Bloomberg View columnist Jonathan Alter distilled what people on the left and the right have been saying about the real issues raised by the controversial SuperPAC ad that focuses on the death of former steelworker Joe Soptic‘s wife.

“What the press should be focused on is what are the consequences of repeal of Obamacare,” Alter said, “and the consequences, as Mike just indicated, are death. Repeal equals death.”

That’s one hell of a bumper sticker, and, as Alter goes on to say, “That is not an exaggeration. That is not crying fire. It’s a simple fact, if you have preexisting conditions, and you are thrown off of health insurance or if you get sick after you or your husband, spouse, loses the job, you’re not going to go to the doctor as soon, your cancer or disease is not going to be caught as quickly, and your odds of dying are much, much increased. So Obamacare will save, literally, thousands of lives. And this is what the debate should be about. Do we, as a country, want to throw sick Americans to the wolves? People with preexisting conditions? And I’m one of them. (Alter is a cancer survivor)”

Alter is absolutely right, no matter who you want to blame for Joe Soptic not having insurance for his wife, there’s really no way around the fact that she didn’t seek treatment soon enough because she didn’t have insurance. Even the Romney campaign acknowledges this.

But delaying treatment is just one of the ways in which not having health insurance kills people. As Cenk Uygur pointed out on The Young Turks last night, even if Soptic’s wife had gone to the emergency room at the first sign of trouble (which people don’t do, mainly because they realize that Emergency Rooms are for, y’know, emergencies), they don’t treat for cancer in emergency rooms. The conservative trope that nobody dies from lack of insurance because they can go to the ER is a lie. Emergency Rooms don’t offer health care, they offer sick and/or dying care.

One recent study estimates the number of Americans who die prematurely each year due to a lack of health insurance to be around 26,000, but notes that other studies suggest the number could be much higher. Even if you do have insurance, your insurance company will look for ways to deny treatment, or even to cancel your insurance, if you let them.

We should be having that conversation, we should be asking of that’s the kind of country we want to live in, but the mainstream media is ill-equipped, failing even to call Mitt Romney out on the lie that he has any plan at all for people with preexisting conditions. The issue is just too complicated for many journalists to understand, let alone cover.

In fact, I’m starting to think health care is too complicated for Republicans, and I don’t mean that as an insult. It’s possible that Mitt Romney just doesn’t know that his plan for preexisting conditions was already a federal law, since 1996. I honestly don’t think Sen. John McCain understands what it means to gut state and federal insurance regulations.

Finally, I think there really might be a lot of conservatives who are convinced that the ER catches everybody who falls through the insurance cracks. They think that somebody somewhere must be taking care of these people. They don’t “want” people to die, they are simply blind (perhaps willfully so, in some cases) to the fact that, yes, America will let you die if you don’t have insurance.