MSNBC Contributor Michael Eric Dyson: Eric Holder ‘Is The Moses Of Our Time’ 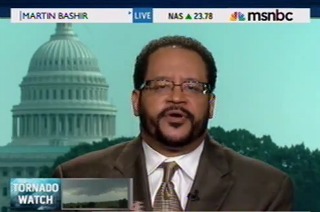 In an elaborate effort to exonerate the members of President Barack Obama’s Justice Department of any wrongdoing in relation to the scandal surrounding the sweeping subpoenas of the communications records of journalists, an MSNBC panel implied that the administration was the subject of persecution. During the discussion, MSNBC contributor and Georgetown University Professor Michael Eric Dyson said that Attorney General Eric Holder, himself a victim of an elaborate right-wing effort to smear him, is “the Moses of our time.”

Dyson opened the segment by insisting that Fox News Channel journalist James Rosen, whose movements were tracked, his phone records and those of his parents logged, and his personal emails searched by the DOJ, is no victim. “You can be a co-conspirator without being a target of investigation,” Dyson said.

MSNBC host Martin Bashir erupted at this notion, exclaiming how it has “stripped bare” the claims of some who have said that the Justice Department investigating Rosen as a willing conspirator in an effort to violate the Espionage Act was slightly heavy-handed.

Joy-Ann Reid, MSNBC contributor and editor of The Grio, added that the Obama administration has been perfectly transparent about the scandals involving the DOJ and the IRS, to the point of informing the press of their existence in the first place.

Later in the segment, asked by Bashir if Holder should resign as attorney general, Dyson agreed that he should step down… “off of that plateau where he resides in high principle, and whip some heads.”

“What he should understand is that he is the chief lawgiver of the United States of America, so to speak – he’s the Moses of our time, and at least for this administration,” Dyson continued.

Dyson concluded by saying that Holder is “the whipping boy” for a right-wing that cannot come to terms with having lost the 2012 presidential election.

One would have to imagine that John Ashcroft, Alberto Gonzalez, and Michael Mukasey would be surprised to learn that they were due such reverence when they occupied the office of attorney general.