MSNBC Contributor: Is Mitt Romney ‘Running For Presidency Of Caucasia-stan’? 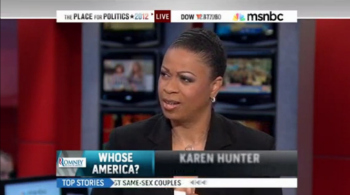 On Thursday’s edition of MSNBC Live, host Thomas Roberts asked a panel of black contributors whether presumptive Republican nominee Mitt Romney’s new ad, “Promise to America,” is worthy of criticism for its lack of diversity. MSNBC contributor Karen Hunter suggested, based on the absence of minority faces in the ad, that perhaps Romney is “running for the presidency of ‘Caucasia-stan’ or some place that doesn’t have anyone of color in it.”

“In his ad there’s not one single person of color,” she continued. “This America that he wants to reclaim, or that people want back, where does it exist exactly?”

Roberts noted that the ad was created solely for the web and is probably “not really meant to bring in the non-converted,” and then asked Republican strategist Joe Watkins whether “there’s a danger in giving the base a white-only face.”

“I think what’s more important is what you say in the ad and to whom you speak,” Watkins replied. “And [Romney] is speaking to everybody. If there’s anybody this this country who isn’t working … this message is for everybody in that group and that would be people of all colors, all backgrounds, of all ethnicities.”

Hunter interjected “Joe, seriously?” And Roberts followed up with Watkins: “You don’t look for somebody who kind of looks like you or resembles you that is speaking to you?”

“The Romney campaign has reached out to lots of people of color, including me,” Watkins said. “And he’s said, you know, this is about … rebuilding America and getting Americans back to work and … he’s reached out to African-Americans and to Latinos, to large groups of people in the minority community, to join with him.”

Hunter then concluded that she’s been watching the entire campaign season and “I’ve always been looking for that [minority] person behind him … and I don’t see a whole lot of you around him, Joe Watkins.”