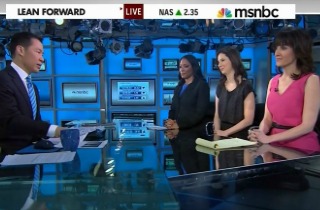 An MSNBC panel convened on Monday to discuss the hours-old revelations surrounding former Secretary of State Hillary Clinton’s maintaining a graded list of Democrats she believed did not support her 2008 presidential bid to her satisfaction. Most of the panel agreed that this is not a damaging revelation because it would not be unique to Clinton’s campaign, but one guest said that the “gendered” elements of the coverage of this scandal disturbed her and indicates that “we just don’t know how to deal with gender.”

“This doesn’t surprise me in the least,” said Democratic strategist and columnist Zerlina Maxwell of Clinton’s “hit list.” “This is very much a routine political exercise that any campaign, you know, that has due diligence would do.”

“I think one thing that really surprised me in the article was this idea of punishment,” MSNBC producer Dafna Linzer revealed. “I can’t see any possibility or even any avenue in which Hillary Clinton would mete out punishment.”

“I just don’t see it,” she continued. “For me, it says nothing about Hillary whatsoever.”

“Those of us who study politics, we’re not surprised that candidates have lists of those who are in favor and not in favor with them, but there’s a gender element here,” DeFrancesco Soto added. “If a guy has a list of people he’s not too keen on, no big deal, but if a woman does, then that is a big deal and it becomes juicy.”

“This just conjures up memories of the gender element when Hillary was running,” she continued.

“She was seen as too tough during 2008, then too soft when she started crying in 2008,” DeFrancesco Soto concluded. “We just don’t know how to deal with gender yet with her.”