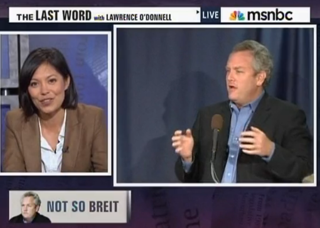 Most Americans who casually follow news may just be catching up on the summer’s first mystery, the story of how a lewd photo ended up being sent to a 21-year-old college student from the Twitter account of Rep. Anthony Weiner. While concrete facts in this story are few and far between, and the Congressman certainly hasn’t been helping, those who first heard of the story on The Last Word tonight may have missed the little information there is out there, and in lieu got an update on Andrew Breitbart and Shirley Sherrod. Wait a minute, wasn’t that last summer?

With Lawrence O’Donnell away on jury duty, The Nation‘s Chris Hayes took the helm, opening the story by calling Breitbart a “character assassin” before relaying the necessary facts of the story. After enough of a crash course for the rest of the segment to make sense, Hayes showed a clip of Breitbart on CNN, immediately followed by Jeffrey Toobin‘s comments on the network that Breitbart’s involvement was simply “too bad.” He then turned to Huffington Post reporter Alex Wagner and lamented that watching Breitbart on CNN made him “want to give up” because the story was “so preposterous.” “This person who has been so discredited so many times,” he said of Breitbart, chastising CNN for having “such a serial manipulator of the media” on the air. Wagner agreed, though then tried to veer the conversation back to Rep. Weiner, who by this point feels like a minor character in the scandal after all the Breitbart talk. While Wagner addresses the situation, the chyron below her reads “Not so Breit,” with a picture of– you guessed it– Andrew Breitbart. Wagner does mention this evening’s “informal press gaggle” and Rep. Weiner’s defensive response to any questions about the matter, but Hayes returns to the question that really matters: is Andrew Breitbart evil, or unforgivably evil?

Many news sources (including Mediaite) upon the story breaking over at Big Government chose to give their readers a caveat about the torrid history of the site and its proprietor. Affiliating a Congressman with lewd photos sent to a young woman– no matter what his role in the transfer of that photo may be– is a weighty charge, and when only one website has covered it, there is reason for pause. But it has been three days, that young woman has spoken, the technology seems to give no direction in which to judge, Rep. Weiner has been less than cooperative with the press on the matter, to say the least, and most of the mainstream media has returned home from the holiday weekend and dug up far more than the slim pickings of evidence available Saturday morning. Four days later, the story is far bigger than just Andrew Breitbart.

That is not to say that there is no room in which to provide the audience with a disclaimer that the man who broke the story isn’t exactly the most trusted voice in American media (but, then again, polls show nobody else is either, unless “Don’t Know” is an accredited journalist. In which case, someone get that man a Pulitzer!). Certainly MSNBC knows their audience, and it’s the type of audience that would look out the window if Andrew Breitbart said the sky was blue– precisely the sort of audience that would gain very much from knowing that, after Weiner’s fiasco of a press conference, CNN’s Dana Bash has risen to the top of the media effort to get to the bottom of this strange, strange story, and that many sources as averse to Breitbart as Hayes appears to be are having second thoughts on the veracity of the original report.