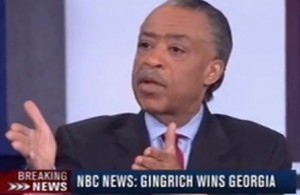 During his victory speech in Georgia last night, former House Speaker Newt Gingrich told the crowd that President Obama, in his Tuesday press conference, “said, ‘You know, I’m really worried about higher gas prices because it will make it harder for me to get re-elected.’ I did not make this up.”

Within minutes, MSNBC’s Al Sharpton blasted Gingrich’s claim, calling it an “outright lie,” while co-host Rachel Maddow shared the panel’s comical reaction to Gingrich’s claim before playing a clip of what the President actually said at that press conference.

It is, of course, a matter of personal preference and taste, but one of the great benefits of having an election team with strong political points of view is that they’re more apt to pick up on a falsehood like this, and correct it quickly.

Gingrich’s remarks rely on complete amnesia from voters, who must remember how soaring gas prices became an issue during the 2008 campaign, during which then-Senator Obama’s response was pretty much what it is now. Gingrich himself must be forgetting how $2-a-gallon gas worked out for Michele Bachmann, unless he thinks the extra fifty cents will make all the difference.

Schultz then singled out voters in the South, a strong Gingrich constituency, as particularly susceptible to this kind of gimmickry. “I don’t mean to diss the South,” he said, “but low information voters might grab on to that, but I don’t know.”

Now, before they get their banjos in an uproar (I kid!), Southern voters ought to consider that if Schultz’s comment is offensive, then so is Gingrich’s attempt to sell them this pile of wooden nickels.

Rev. Al and Rachel Maddow then simultaneously jumped all over what Gingrich said about the President’s press conference. “Let me point out one fact checking matter,” Maddow said, as Sharpton cut in with “You talk about credibility, he outright lied.”

Maddow described the scene as she and the entire MSNBC primetime lineup watched Gingrich’s speech. “He paraphrased the President, saying he said at the press conference that he only cares about high gas prices because it will affect his chances at reelection. He said ‘I’m not make it up,’ and all of us said ‘Yes you are making it up!’ because this what is the president actually said in the press conference.”

She then played a clip of what the President actually said at that press conference.

I can’t think of one, either, but off the top of my head, I can think of a few other examples of misquoting the President, besides Santorum’s weird attack on going to college. There used to be a candidate named Rick Perry who accused the President of calling Americans “lazy,” which isn’t at all what he said. A few days later, Mitt Romney came under fire from the political media and others for running an ad that attributed a 2008 quote to then-Sen. Obama that was actually Obama quoting the McCain campaign.