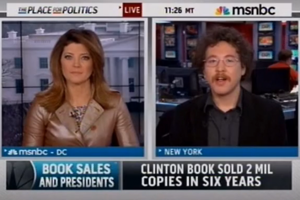 In the battle of the presidential memoirs, George W. Bush is gaining some significant ground on his predecessor, selling almost as many copies of Decision Points in two months as President Bill Clinton sold of his in two years. Why would Americans be so eagerly purchasing the product? One suggestion on MSNBC is that, maybe, people just hate Bush more. Speaking to Norah O’Donnell, who introduced the segment in awe of the book sales given approval ratings, Salon writer Alex Pareene brought a grab-bag of reasons that Bush’s book may be selling like hotcakes, few of which were flattering:

It may be the fact that he was hated by so many people actually helped fuel his book sales because people wanted to hear him actually justify himself and explain some of his decisions that he made. And, you know, there are, I mean, you can imagine that some people bought it as a gag or some people got it, received it as a gift and didn’t really want it.

Other speculations? The advent of the Kindle make it easier and cheaper to buy books, and that Clinton’s book was simply too long.

While the curiosity angle seems to hold some water to it, it’s hard to imagine that consumers would actively line the pockets of someone they detest so, as Pareene’s initial theory seems to imply. And as for pricing, Noel Sheppard at Newsbusters points out that the cheapest copy of Decision Points is still pricier than Clinton’s tome. Perhaps best to leave this one as an unsolved mystery before trying to link each president’s approval ratings to their sales figures. Or maybe people will just buy a shorter book.