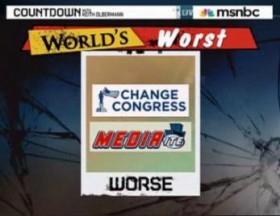 The tragic shooting in a Tucson area Safeway that killed 6 individuals and put Rep. Gabrielle Giffords in critical condition has caused significant ripples in the political media. Amid fingerpointing about “violent rhetoric,” Countdown host Keith Olbermann led the charge with a “Special Comment” calling for an end to such discourse. According to one report, it appears that Olbermann is putting his money where his mouth is, and permanently ending his “Worst Person in the World” segment, but MSNBC tells Mediaite that no decision has been made.

Sources with knowledge of the decision have told AllYourTV that MSNBC host and commentator Keith Olbermann is expected to announce on Monday’s show he is permanently dropping the “Worst Persons In The World” segment from “Countdown,” effective immediately.

A spokesman for MSNBC told us that the “report isn’t correct….no decision has been made,” and referred us to Olbermann’s Twitter feed from last night:

W/that & news we’ll have an announcement about “Worst Persons” on Monday’s show, I thank you all for your support this terrible weekend

While MSNBC’s denial states that it’s not a done deal, it leaves open the possibility that the segment will be eliminated. Given the events of this past weekend, and Olbermann’s own pledge on Saturday to tone things down, this would not be a surprising move. In any case, it certainly appears to be under serious consideration.

This isn’t the first time that the firebreathing host has re-thought the signature segment. Following criticism from The Daily Show’s Jon Stewart, Olbermann shelved the segment for a few weeks, and when he returned it, added a parenthetical subtitle: Worst Person in the World (not really).

Cynics might see this as a ploy to shame right-wing commentators, while laying quick claim to the moral high ground, but I don’t think that’s the case. Given the gravity of recent events, he’s due the presumption that this is the result of serious self-reflection. That is not to say that he won’t also urge others to follow his lead in cooling their jets, but that’s a secondary consideration.

While there’s no indication that the killer was motivated by anything other than his own lunacy, it’s only natural that the intersection of violence with politics would make use think about re-drawing the lines around political discourse. That re-drawing, though, should be done finely. For example, it illustrates the fact that using the image of a bullseye on an electoral map is in unnecessarily poor taste, when a flag or a pushpin would be just fine.

The real opportunity here, though, is to assess the degree to which we enforce existing boundaries. To use the much-discussed map issue again, there were many who agreed at the time that the Sarah Palin “crosshair map” crossed the line, including Rep. Giffords. Such criticisms, though, were marginalized as politically motivated, or deflected with flippant analogies. It is here that our current system of discourse failed, not in drawing the lines, but in enforcing them.

The flip side to that is the degree to which people have rushed to assign blame for this tragedy on Palin, when no such causal link exists.

Ironically, it was with Olbermann’s “Worst Persons” segment that I illustrated the need not to throw out the baby with the bathwater, when I wrote of his Special Comment:

So, while we should continue to police irresponsible statements like Sharron Angle’s “2nd Amendment remedies,” or Keith Olbermann’s own Hillary Clinton beatdown scenario, orGlenn Beck’s Pelosi-poisoning fantasies, there is a place for violent imagery in politics. In fact, it’s on Keith Olbermann’s show. Every night, Olbermann introduces the best segment of the show by saying “Get out your pitchforks and torches…”

The line is a reference to the frightened, angry villagers in Mary Shelley’s Frankenstein, and is clearly meant to be ironic, just as Palin’s map was clearly meant metaphorically. That some metaphors are in poorer taste than others is a fact that should be governed by their merits, not the ability of lunatics to discern them.

I stand by the sentiment, and the one I expressed the first time Olbermann suspended the segment. It’s true, Olbermann sometimes crosses the line during that segment, but he also crosses it without it. The segment isn’t the problem, nor are the currently-drawn lines of decency. It is the unwillingness of people to remain within them, or to call someone out for crossing them just because they’re on your “side.”

The crowning irony is that segments like “Worst Persons in the World,” or even Bill O’Reilly‘s “Pinheads and Patriots,” are the very vehicles by which those lines are enforced. Eliminating them isn’t the answer, doing them better is.

Update: Keith Olbermann has issued a similar denial via his Twitter feed:

Also a site called Allyourtv has posted a story saying we are dropping Worsts. A fabrication. Haven’t even had the 1st show meeting today