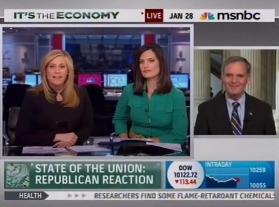 Andrew Breitbart vs. David Shuster wasn’t the only clash on MSNBC dayside yesterday.

CNBC’s Melissa Francis and MSNBC’s Contessa Brewer had Sen. Judd Gregg on to talk about Pres. Obama’s State of the Union and the budget, and it got heated fairly quickly.

Francis followed up with “That’s good in theory, Senator. How would you practically…,” and that set Gregg off. “You don’t tell me it’s good in theory. What are you…how do you get off saying something like that?”

The rest of the segment was spent with Gregg chastising Brewer for “the most irresponsible statement I’ve heard from a reporter, probably in a month,” while Brewer and Francis denied that it happened the way Gregg was portraying it.

With all this on-air fighting, maybe it will raise MSNBC’s dayside ratings!

Here’s the interview (via via via):