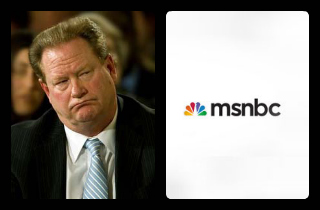 Well, it’s official. Liberal firebrand Ed Schultz is out, and progressive policy wonk Chris Hayes is in at MSNBC’s 8 p.m. weeknight primetime slot. Before making this change that was apparently a long time coming, MSNBC effectively fooled (dare I say may have lied to?) the media (and Schultz himself) into thinking The Ed Show was safe.

Hayes will leave his weekend morning show to host the prime time gig, while Schultz claims he “raised his hand” and volunteered for the “opportunity” to end The Ed Show and host a new weekend 5-7 p.m. show. Right.

Happy faces aside, it seems clear this was Schultz’s spin and that, in fact, MSNBC had pushed him out of the more far prestigious primetime slot.

No one knows exactly why Schultz was demoted to weekends, but the shift undoubtedly comes as a move towards the young, technocratic image the network has effectively crafted under the Obama administration. As The Week notes, Schultz’s bellicose manner is a relic of the Bush era, when progressives were fired up and on the warpath. But now, it’s likely MSNBC wanted to make room for the youthful, cerebral and mild-mannered Hayes to fill out an evening that also includes young wonk-in-chief Rachel Maddow.

The media world remembers when New York Times media reporter Brian Stelter broke the story back in November that Schultz was likely on his way out of 8 p.m. In return, the fiery host unleashed a flurry of insults at Stelter, accusing him of reporting “media garbage” and not being able to “sniff very well” when digging through a scoop.

While Schultz stormed, MSNBC claimed : “We’re very happy with the performance of our prime time lineup, which topped Fox News Channel three nights this week. There are no changes planned.”

Television news insider site TVNewser seems to have fallen for the “spin” and headlined an article “Ed Schultz Being Replaced at 8pm? Not so Fast” and discussed Schultz’s “strong” ratings in his time slot.

Brian Stelter is a great media reporter and it always seemed preposterous that he had somehow gotten it totally wrong. With that in mind, I guess MSNBC could argue that its reaction was technically truthful at the time (operative word: “planned”), but more likely it was just PR spin that managed to fool both Schultz and the some in the media into thinking he wasn’t going anywhere.

On the other hand, many will speculate that the move could be mutual on both parts, seeing as Schultz’s wife just finished cancer treatment, and he might not mind having some extra time to spend with her. It’s also possible Schultz was in such rage over the inevitable prime time ouster that he lashed out at Stelter just because he could.

But I’d say Schultz having been snookered is a much more likely scenario, seeing as how there’s no way someone as hot-headed as The Ed Show host would play along for four months with the network if he knew the end was near.