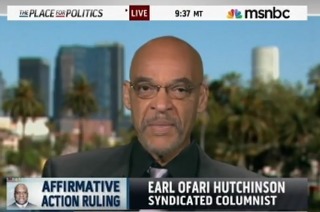 On Wednesday, radio host and columnist Earl Ofari Hutchinson joined MSNBC anchor Thomas Roberts where he expanded on the points he raised in a recent column relating to the upcoming Supreme Court decision on affirmative action. Hutchinson said that conservative Supreme Court Justice Clarence Thomas has “benefited” from affirmative action over the course of his entire life. Hutchinson added that Thomas’ present opposition to the program is “pathological.”

Roberts asked Hutchinson to expound on themes he touched on in a column he wrote for The Huffington Post in which he called Thomas “affirmative action’s biggest beneficiary and biggest hypocrite.”

“Here’s a fellow who has, essentially, had all the benefits going back to Yale Law School, assistant secretary of education, a position on the federal judiciary, and, of course, the Supreme Court,” Hutchinson began. “Every step of the way, he’s had, let’s just say, patrons.”

“Every step of the way, he’s had the benefit of affirmative action,” he added. “What many can’t figure out; why the vehemence?”

“The passion, the vehemence, almost a pathological need to really hit at affirmative action, that’s been the thing that’s really puzzled so many people,” Hutchinson observed. “We’re going to see it manifested now.”

“Many people are going to continue to ask, “Mr. Thomas, you have benefited so much from a program over time, why do you want to deny so many other people the same benefits of that,” Hutchinson concluded.