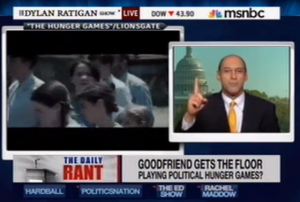 On Tuesday’s The Dylan Ratigan Show, guest host Ari Melber spoke to Democratic strategist David Goodfriend. Riding on the popularity tide of The Hunger Games movie, Goodfriend drew parallels between the movie and America’s income inequality today. He further compared the movie to the current health care fight in the Supreme Court, recommending Republicans (and viewers) go see it and “reflect on what kind of America you want to live in.”

Goodfriend summarized: “The story is about a future, post-apocalyptic North America where, in penance for an uprising, the Capitol city requires each of the outlying districts to send children to a survival game — out of which only one may emerge alive. A fight to the death, designed by the people in power.”

He then laid out his argument:

Now, look more closely, and you’ll see a commentary on our own country. The people in the movie’s Capitol district are wealthy, pampered, living the life of luxury. The people in the outlying districts, who must send their children to die, are poor, starving, destitute, living in primitive conditions. It’s the 99 percent! And the 1 percent!

“With the memory of The Hunger Games fresh in my mind,” Goodfriend elaborated, “I’m watching the Supreme Court hear three days of oral arguments on the constitutionality of the Affordable Care Act.” Regardless of where you stand on the issue, “this health reform statute is one of the biggest attempts in a generation to address inequality between the haves and the have-nots in the United States.”

Goodfriend then juxtaposed this health care battle with the society in the movie:

Should the destitute and the poor, in our country — like the ones in Suzanne Collins’ mythical dystopia — suffer and die because they cannot afford health insurance? Or should we as a nation act to ensure everyone has affordable health care and therefore longer, healthier lives? Should we tolerate a country in which children die because the people in power perpetuate a system that excludes them? Where insurance companies can deny coverage to a child with a pre-existing condition? Or do we set up rules of the road where we all buy insurance so everyone has a chance at life, and costs are shared in a rational way?

As a Democrat, he said, “I would love to claim that my party came up with the brilliant idea of everyone buying into health insurance in order to achieve universal coverage.” But it was the conservatives who came up with it, he continued. And Mitt Romney was the “guy who first put it into practice” in a Massachusetts system — “where it’s working.”

But now that a Democratic Congress and president turned the idea into law, Goodfriend said, the Republican party is turning against its own idea. “Perhaps the prospect of the closing of the income disparity gap in this country was too much for them to bear,” he said. “I suggest they, and you, go to see The Hunger Games — and reflect on what kind of America you want to live in.”

Goodfriend’s certainly not the first to draw parallels between this dystopian society and our own. And yes, there are valid comparisons to be made — as is often the case with stories portraying utopian/dystopian worlds. As someone who loves (and took a writing course about) such literature, I won’t deny that. But this larger health care allegory seems to be taking the movie adaptation of a young adult book series a tad too seriously.