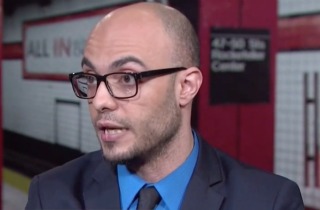 Most major news outlets have refused to show any clips or images from ISIS’ video depicting the horrible death of a Jordanian pilot, burned alive. Fox News, however, showed a still of Muath al-Kasaesbeh set aflame on-air, and posted the entirety of the ISIS video on its website, in its online player.

Fox News executive John Moody defended the decision to Mediaite today, saying the video shows a special kind of barbarism that Americans just need to see for themselves.

But on MSNBC tonight, guest Laith Alkhouri told Chris Hayes Fox actually helps ISIS by “essentially disseminating terrorist propaganda.” He explained that ISIS doesn’t want the video to disappear from the web, and so the fact that there is a “solid, permanent link to this video on an American channel” is a good thing.

He concluded by saying that any network that would present that kind of propaganda in full is basically “helping” terrorists get their message out.

For the record, this is how Moody responded when asked about that criticism by Mediaite:

I don’t think anyone has ever accused Fox News of being pro-terrorism in our coverage. I understand there are people who hold that opinion, and they have that right. But I really cannot imagine the person who would look at this video and come away admiring ISIS.