MSNBC Guest: If SCOTUS Doesn’t Strike Down DOMA, It Will Go Down In History Like The Dred Scott Decision 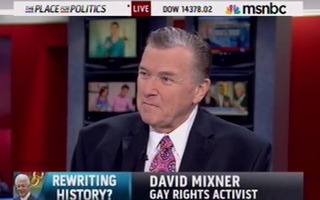 Gay rights activist David Mixner appeared on MSNBC with anchor Thomas Roberts on Friday where he warned Supreme Court Chief Justice John Roberts that his legacy was at stake as the Court takes up the constitutionality of two laws regarding the rights of gay Americans. Mixner said that, if the Roberts Court does not strike down these laws, those decisions will be viewed by future generations as infamously as Americans view the Court’s decisions on Dred Scott v. Sandford or Plessy v. Ferguson.

“Do you think the Supreme Court is going to give the Republicans the cover they need to come out of the closet for marriage equality later this year,” Roberts asked after noting the Supreme Court may invalidate both DOMA and California’s Proposition 8, which banned same-sex marriage in the state.

“I think the key is that John Roberts is going to be very concerned about his legacy,” Mixner replied. “This is his court. This will be the signature.”

“The question is whether he’s going to go the direction of the Dred Scott decision or Plessy v. Ferguson, where separate but equal, or if he’s going to see the inevitable tide of history and want his court to be on the right side of history,” he added.

“This is a step towards freedom for millions of fellow Americans,” Mixner concluded.