MSNBC Guest: McConnell ‘Screwed’ In KY If He Fires Popular Campaign Manager Who Spoke Ill Of Him
video

MSNBC Guest: McConnell ‘Screwed’ In KY If He Fires Popular Campaign Manager Who Spoke Ill Of Him 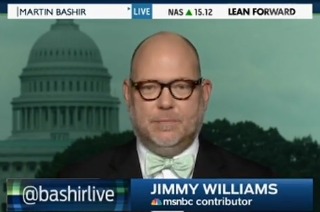 First reported in the Economic Policy Journal, Benton was recorded saying that he was “holding” his “nose” and was merely killing time working for McConnell’s campaign until Paul comes up for reelection in 2016.

Williams said that the unpopular McConnell, facing a tough reelection campaign and a primary challenge from the right, cannot fire Benton without further alienating his conservative base.

“If I’m Mitch McConnell and this is the guy running my campaign, I’m going to walk in a room and look and say, ‘wait a minute,” Williams said. “’I’m supposed to trust you with my reelect; especially when my numbers are in the tank if not below my Democratic opponent?’”

“He can’t do anything about the fact that his campaign manager thinks he sucks,” the MSNBC contributor concluded.