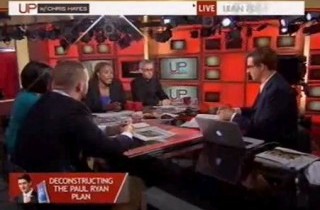 On this weekend’s Up with Chris Hayes on MSNBC, the eponymous host and guest Heather McGhee suggested that white seniors have an inability to trust President Barack Obama because of race and familiarity.

McGhee noted that Republican VP candidate Paul Ryan is now defending Medicare despite his budget plan calling for cuts to the program. She then went on to explain why she believes this contradiction manages to elude people because: “Frankly, the American people right now are so distrustful of politicians in general, and they are very confused, rightly, by the 75 time horizons that we’re throwing around on these big fiscal policy debates.”

“There is an inability for white seniors to trust Barack Obama on Medicare,” she continued, “and it doesn’t have anything to do with the policies that he’s put out. It has to do with the demographics –”

“I like the way you’re using the word ‘demographics,'” Hayes interrupted. “You mean race.”

“Well, yes, I’m sorry. By no means am I afraid to use the word ‘race,'” she responded. “It has to do with race, and it has to do with familiarity and has to do with the fact that, in 2010, the Republican Tea Party ran on cuts to Medicare that were in the ACA.”

“It also has do with demographics in the generational sense,” Hayes added. “The big hustle of the Ryan plan is, ‘Look, seniors of America, we’re not coming for you. If you’re over 55, you’re fine. We don’t touch anything.'” In other words, says Hayes, this is a way of saying: “Current seniors, don’t worry, we’re not coming for you. It’s those other people we’re going after.”