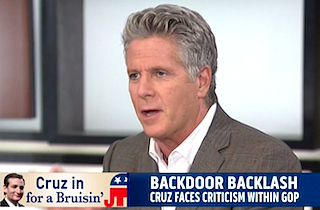 On Thursday morning, frequent Morning Joe guest Donny Deutsch argued—and former White House Press Secretary Robert Gibbs agreed—that Senator Ted Cruz (R-TX) was the “Honey Boo Boo of Washington,” more infamous than famous, and that his infamy might put him ahead of the pack in primaries but would never win him a general election.

“We’ve got to separate the difference between notoriety and success,” Deutsch said. “This is a new breed we’re seeing. We see the formula here. [Cruz] is the Honey Boo Boo of Washington. You’re gonna get the cameras pointed at you, you’re gonna get big numbers, but at the end of the day you’re not going to stick around.”

“Where are the Chris Christies?” Deutsch continued. “Where is the future of the party who stands up, to say, ‘This is not what the American people want’…He’s got to get up front. This is a huge marketing opportunity for any Republican who can understand how general elections go.”

“I don’t disagree that he’s the Honey Boo Boo of Washington, but that series keeps coming on TV because a lot of people out in America watch it,” Gibbs said. “This is 30 to 40 Republicans who believe and probably in many ways are speaking for the hard-core Republican base, who are leading those that quite frankly just aren’t strong enough, and who, if they step out of line, will be beaten in a primary. Ted Cruz may be doing this in a way that doesn’t win a general election. But my guess is his numbers are through the roof with Republicans in early presidential primary states.”