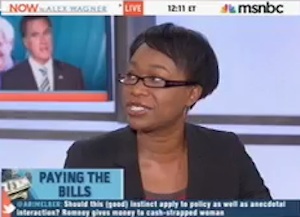 Appearing on MSNBC’s Now with Alex Wagner, TheGrio columnist Joy-Ann Reid lambasted Mitt Romney for handing an impoverished black woman a wad of cash at a campaign stop. “As an African-American woman, it galls me,” Reid exclaimed. “I don’t even like to watch it. I felt like it plays into every sort of patronizing stereotype of black people.”

RELATED: Ruth Williams On The Cash Mitt Romney Handed Her: ‘He Paid For My Light Bill’

“Oh, here’s this little lady, let me give her 50 bucks!” Reid snarked. “I mean, this is the guy who offered a bet of $10,000 on stage, you know, to another candidate, but, you know, here, let me lay off 50 bucks on this woman. And I think it plays into that conservative meme that you don’t need actual programs that the government puts in place to help people in need, we’ll just give them charity. The church will take care of them, I’ll give them 50 bucks.”

Earlier in the segment, Wagner was also appalled by Romney’s gesture, calling it “one of the more uncomfortable moments I’ve seen on the campaign trail, on many, many levels.”

On CNN’s Starting Point, Ruth Williams, the recipient of the money, was thankful Romney handed her the cash and denied it was a “political calculation” on the former Massachusetts Governor’s part.

“It was a divine intervention by the Holy Spirit,” Williams told Soledad O’Brien. “I listened to what God said. I’ve never known anything about [Romney], I’ve never done anything for him, I’ve never even spoken to him. You cannot buy a vote with 55 or 60 dollars…It kept me and my kids eating this weekend.”