MSNBC Guest: Romney Went Into NAACP Conference ‘Wanting To Get Booed For Something’
video

MSNBC Guest: Romney Went Into NAACP Conference ‘Wanting To Get Booed For Something’ 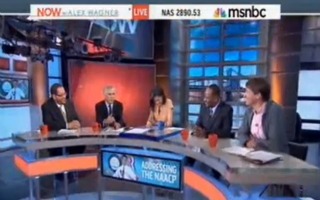 On Tuesday, a guest on MSNBC’s Now with Alex Wagner suggested that Republican presidential candidate Mitt Romney went into the NAACP speech with the expectation and desire to get booed by that audience. The guest said that when that did occur after he said he would repeal “Obamacare,” Romney appeared to be enjoying the reaction.

RELATED: Mitt Romney Booed At NAACP Convention For Saying He Would Eliminate ObamaCare

David Corn, columnist with The Nation, praised Romney’s speech saying that he did not make any missteps like saying, for example, that some of his “best friends are African-American NASCAR owners.”

“He wants to be able to say, ‘hey, I can go talk to people who I don’t agree with. I can get booed and I can be reasonable,’” said Corn of Romney’s objectives ahead of the NAACP speech. “I can tell them what I think in a polite, respectful way. I can take their criticisms and just show them that I care about what they think.”

Corn said that approach would work well with voters who are on the fence about the election and who still do not know who Romney is at this stage of the race.

New York Times Reporter Hugo Lindgren said that Romney appeared to expect that he would receive a negative reception from the NAACP audience.

“That moment where the Obamacare line – he had this little, kind of, George W. Bush smirk on his face,” said Lindgren. “He kind of knew he was going to get – he kind of wanted it. And he sort of enjoyed it a little bit.”

“He went in there wanting to get booed for something,” Lindgren concluded.

Fredrick Harris, author of The Price of the Ticket, said he disagreed with Lindgren. Romney was not seeking to secure his base with his NAACP address, said Harris, but he was attempting show independent voters that “I’m not as bad as you think I am.”