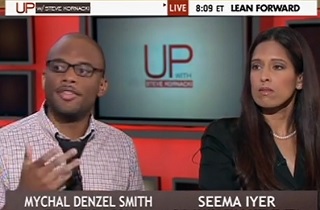 George Zimmerman‘s acquittal for the murder of Trayvon Martin will continue to reverberate in the media, and in our larger culture, for a very long time, but it’s not clear if this will be for better, or for worse. On Saturday morning’s Up With Steve Kornacki, The Nation‘s Mychal Denzel Smith made the provocative observation that George Zimmerman’s defense team “literally invoked the same justification for the killing of Trayvon Martin that you would during lynching,” that “George Zimmerman was protecting, not just himself , but white womanhood from this vicious, black thug.”

“They had no respect for Trayvon Martin to begin with,” Smith began. “The thing that disgusted me, the jury was made up of six women, five white women. The defense literally invoked the same justification for the killing of Trayvon Martin that you would during lynching.

“They showed a picture of George Zimmerman’s white woman neighbor,” he continued, referencing defense witness Olivia Bertalan, “and showed her as the picture of fear and said, ‘This is what the neighborhood was up against, and put a picture of Trayvon Martin with his shirt off, looking like the most thugged-out version of Trayvon Martin you could get, and basically said George Zimmerman was protecting, not just himself, but white womanhood from this vicious, black thug.”

It was a tough observation that could have led to a fascinating conversation, but host Steve Kornacki ignored it, and the panel moved on.

Smith was referring to a portion of George Zimmerman defense attorney Mark O’Mara’s closing in which he repeatedly referred to Olivia Bertalan, a victim of a home invasion, as “the face of frustration” at crime in Zimmerman’s neighborhood. Earlier in his summation, O’Mara had established that in Olivia Bertalan’s home invasion, and other crimes in the neighborhood, “the only people who were found and arrested were young, black males.”

As O’Mara talked about Bertalan later in his closing, he showed a photo of her to the jury, and minutes later, found a pretext to show the jury that picture of a shirtless Trayvon Martin.

The explicit purpose of Bertalan, in O’Mara’s closing, is provocative enough on its own. He’s saying that Olivia Bertalan and George Zimmerman had every reason to view 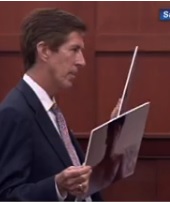 Trayvon Martin as a threat, because he was black, and some criminal suspects are also black. That’s a pivotal concept in this story, which one side will call racism, and the other will call realism. The latter view has become dangerously normalized and legitimized, and needs to be discussed.

Smith, however, makes the deeper connection in O’Mara’s closing, to the murder of Emmett Till, who was murdered for allegedly paying some sort of attention to a white woman, and to other lynchings in which sexual menace was the excuse. Left unexplored by the Up panel were issues like whether O’Mara was deliberately exploiting a historic racist trope, or was it an organic outgrowth of a specific strategy to play on the anxieties of the jury, or was it all just a coincidence? However you feel 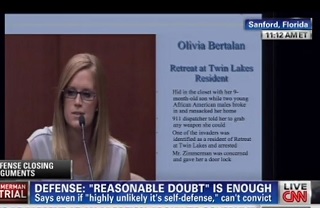 about the premise, and especially if you’re inclined to react defensively at any suggestion of racism, Smith’s observation was an opportunity to explore how and why these subtexts emerge, and whether Mark O’Mara should have felt any constraint in using them.

The many discussions of race and justice to come offer the promise of greater understanding, but a media that can’t decide if “cracker” is worse than the n-word doesn’t inspire confidence that this promise will be fulfilled. Smith was ignored by his peers, and those who don’t ignore him will undoubtedly begin, and end, with a hearty “How dare you?”