MSNBC Guest Skewers White House: An Attitude They Don’t Have To Answer Questions From Journalists
video

MSNBC Guest Skewers White House: An Attitude They Don’t Have To Answer Questions From Journalists 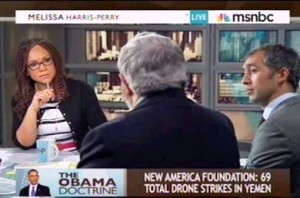 On Melissa Harris-Perry Saturday morning, David Cay Johnston, an investigative reporter and professor at Syracuse University College of Law, lambasted the Obama Administration as hermetically sealed toward journalists, even in comparison to the Bush and Reagan administrations.

Following a discussion on the President’s drone speech, in which the panel agreed that while drones are here to stay, the true problem is the lack of visibility and accountability into their use, Johnston expanded the point to a larger condemnation of the White House’s lack of transparency.

“They have this attitude that they don’t have to answer questions from journalists if they don’t like the questions,” Johnston said. “I’m sorry, the journalist controls the privilege entirely.”

Harris-Perry followed up on this: “I sometimes miss the amount of emotional angst, and potentially also the sort of structural difference that is going on with this White House,” she said. “I hear it from journalists all the time, that this White House is fundamentally different. It’s very hard for me to believe that vis-a-vis the eight years, for example, of the George Bush Administration or even of the Clinton era—there’s really something structurally different?”

“The Obama administration is much less open than to journalists than Bush was,” Johnston said. “The Reagan admin was much more open. I had vigorous, tough conversations on the phone and in person with people from the Reagan administration. They may not like your questions, but they respected that it was their job to answer them. The Obama people are like, ‘What are you asking that for? What do you want to know that for?’ And if they don’t like the questions, they just don’t get back to you in many cases.”

The panel agreed that for all the Obama Administration’s transparency shortcomings, Obama’s speech on Thursday led the way toward putting a timetable on the Authorization for Use of Military Force, and increasing oversight on the drone program.