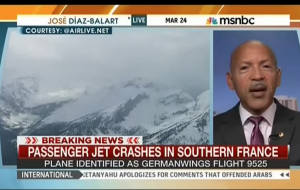 Former pilot Jay Rollins appeared on The Rundown with Jose Diaz-Balart this morning to discuss the Germanwings flight that crashed in the French Alps this morning, with over 150 passengers presumed dead. Rollins pointed out that it seemed “perplexing” that a plane in a controlled descent would come down as quickly as it did, from a cruising altitude of 38,000 feet, to just over 5,000 feet in ten minutes.

“But something else comes to my mind that no one else has mentioned. This aircraft is highly computerized, and this was the same aircraft that was involved with the AirAsia situation,” he mused in the clip first spotted by TPM. “There’s one possibility that no one has brought up, and I wonder, could this be a hacking incident?”

Comparing it to a recently downed US drone in Iran, Rollins said that the German pilots could have encountered “outside forces” that caused them to tell air traffic controllers that they had an emergency, but couldn’t figure out exactly what it was. But in regards to hacking, Rollins noted that the flight did have a computerized steering system, but was unsure as to what that meant — and, apparently, not many other people do either:

Well, this is the brave new world that we’re entering as we use more and more computerization in an age when people are hacking and otherwise following with the system. The older aircraft, the Boeing aircraft in general use hydraulics. So even though you may have an auto pilot, if it malfunctions, you can disengage that auto pilot and regain manual control. But in a fully computerized setup like what you see in the Airbus and also the Boeing 787, these are are aircraft that are controlled by computers. so when the pilot puts in any sort of change for the aircraft flight controls, it first goes through the computer that mediates it, and then tells the controllers what to do. I find it problematic, actually.