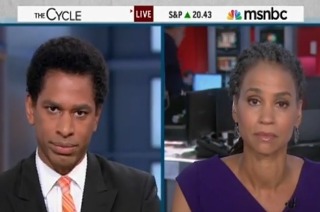 On Thursday, MSNBC’s The Cycle debated the likelihood that an acquittal of George Zimmerman for the murder of Trayvon Martin would result in riots in the black community. One guest asserted civil unrest will not come about as a result of the acquittal alone, but preexisting conditions of poverty and humiliation may be inflamed by a not guilty verdict. She specifically cited state-level “Stand Your Ground” laws which have the effect of “humiliating” and endangering African-Americans and Latinos.

MSNBC host Touré began by asserting that those commentators warning of riots were insulting members of the black community with the insinuation that African-Americans could not react to a not guilty verdict nonviolently.

He said that this belief is similar to the profiling that he asserts Zimmerman engaged in when he determined Martin was a threat. “It almost always is accompanied by economics and people saying, ‘We don’t have any other way to speak,’” he added. “That’s what happened in LA [in 1992], not just the acquittal.”

MSNBC contributor Maya Wiley agreed. She noted that the unemployment rate in the black community is nearly twice the national average. “It’s not that we don’t have some of those conditions,” she said.

“One of the things that people are looking for in this case is as a nation are we going to pay attention to the fact that 24 states have ‘Stand Your Ground’ laws – sometimes they’re called ‘make my day’ laws,” Wiley added.

“Those are some of the conditions that are producing what, really, what I would call a process of humiliating people who are black, people who are Latino, and putting them in physical danger like Trayvon was in,” she asserted.