MSNBC Guest: Tea Party People Think Government Does Too Much For Black People 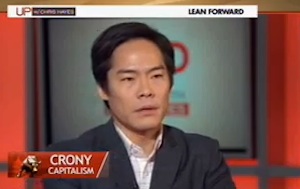 In a discussion Sunday on MSNBC’s Up With Chris Hayes, The Nation‘s Richard Kim disputed that the Occupy Wall Street movement and the tea party shared reciprocal goals. Kim argued that one of the major differences between the two groups was that that the tea party didn’t want the government supporting African-Americans. “One of the key polling points around that is that when you poll tea party people, they think government does too much for black people, and that’s one of the markers of whether you are in the tea party or not in how you respond to that question.”

Kim may have been referring to a 2010 CBS News/New York Times poll of tea party members that showed 52% agreed that too much has been made of the problems facing African-Americans.

“I wanted to push back on the idea that there’s a huge overlap between the tea party and Occupy Wall Street,” Kim explained. “I reported on both of them on the ground, and I think on a superficial level, you see this frustration at Washington, but it’s coming from fundamentally different places. When you talk to Occupy Wall Street people, they think Washington is wholly owned by Wall Street, and they are mad because Washington has not done enough to fix the economy. When you talk to tea party people, they think Washington has been overrun by special interests. And what they mean by that are unions like SEIU, ACORN and Van Jones…and what they think the problem in Washington is that it’s redistributing money away from the top to the bottom.”

Watch Kim’s analysis on Up With Chris Hayes below via MSNBC: