MSNBC Guest Tells The Cycle How To Tell If You’re Feminist: ‘Put Your Hands In Your Panties’
video

MSNBC Guest Tells The Cycle How To Tell If You’re Feminist: ‘Put Your Hands In Your Panties’ 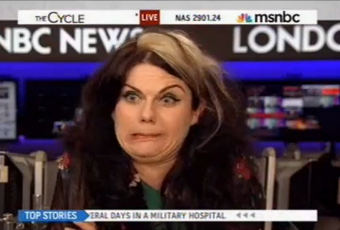 On Monday’s edition of MSNBC’s The Cycle, British broadcaster Caitlin Moran talked about her new book How To Be A Woman, giving the hosts advice on the subject, and explaining her vision for “a new kind of feminism.”

If we are to consider Moran an expert, then apparently being a woman includes mugging relentlessly with funny faces for the camera while being introduced. But fittingly, she explained that this new generation of feminism is one marked by a sense of humor:

The old school feminist had to come from a position where women were treated like animals. They had to argue they were humans and equal to men, which would put you in a bit of a mood and make you quite angry. I’m lucky enough to stand on the shoulder-pads of previous generations, so I can make with the ruffle a bit more. That’s the basic difference. I can make gags about how much my nickers hurt and Gloria Steinem was too busy fighting for equality and legislation to do that.

“It’s simply that people don’t know what the word means,” Moran responded. “Every first-world woman lives in a feminist world. You were born equal to boys, you were educated at school alongside boys. If you get married, you’re not a possession of your husband. If heaven forbid you’re raped, that’s a crime. And you’re allowed to vote.

“So we live in a feminist world. Women live feminist lives. It’s just that we’ve forgotten what that word means,” she continued. “In my book I give women a very easy test to work out if they are women. Which is that you should put your hand in your panties and check what kind of genitalia you have. And if it’s female genitalia and you wish to be in charge of it: Congratulations, you’re a feminist.”

“We’ll do that later, during the commercial break,” Cupp joked.

Moran then argued that the new generation of feminists should not believe that pornography is bad for women. “Pornography is just some people having sex that we’re watching. I can’t see why, as a feminist, it would damage me to see people having sex,” she argued. “All through history, we’ve seen people having sex — it’s on vases, and vellums, and scrolls. That’s fine. It didn’t damage us as people. Now more than 90% of teenagers in the world get their sex education from pornography so, as a good and strident feminist, I think the thing to do is not try to ban pornography.”

Co-host Krystal Ball took issue with Moran’s “issue with high heels,” as the camera zoomed in to a tight-shot on Cupp’s

“What it basically comes down to is that I can’t walk in them,” Moran joked. “I’ve got weak ankles and quite frankly I can’t walk in them. I’m not saying high heels should be banned. It’s just that you always have to wear heels if you’re going somewhere posh to the point where I don’t think feminism will have worked until a woman goes and collects an Oscar in a pair of shoes that are comfortable. Every man that ever won an Oscar had comfortable feet, walked on the stage and could dance the night away. Every woman who ever won an Oscar walked up on the stage saying ‘My feet are killing me. I’m in so much pain!’ When women go up there and get an Oscar in flats then feminism will have worked. We’ll be comfortable, finally, like men.”